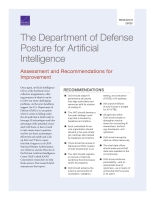 The Department of Defense's Posture for Artificial Intelligence

Assessment and Recommendations for Improvement

Once again, artificial intelligence (AI) is at the forefront of our collective imaginations, offering promises of what it can do to solve our most challenging problems. As the news headlines suggest, the U.S. Department of Defense (DoD) is no exception when it comes to falling under the AI spell. But is DoD ready to leverage AI technologies and take advantage of the potential associated with them, or does it need to take major steps to position itself to use those technologies effectively and safely and scale up their use? This is a question that Congress, in its 2019 National Defense Authorization Act (NDAA), and the Director of DoD's Joint Artificial Intelligence Center (JAIC) asked RAND Corporation researchers to help them answer. This research brief summarizes that report.

The term artificial intelligence was first coined in 1956 at a conference at Dartmouth College that showcased a program designed to mimic human thinking skills.[1] Almost instantaneously, the Defense Advanced Research Projects Agency (DARPA) (then known as the Advanced Research Projects Agency [ARPA]), the research arm of the military, initiated several lines of research aimed at applying AI principles to defense challenges (see Figure 1). Since the 1950s, AI — and its subdiscipline, machine learning (ML)[2] — has come to mean many different things to different people: For example, the 2019 NDAA cited as many as five definitions of AI, and no consensus emerged on a common definition from the dozens of interviews conducted by the RAND team for its report to Congress.

To remain as flexible as possible, the RAND study was not bound by precise definitions, asking instead, "How well is DoD positioned to build or acquire, test, transition, and sustain — at scale — a set of technologies broadly falling under the AI umbrella"? And if those technologies fall short, what would DoD need to do to get there?

The RAND team distilled the NDAA's mandate into the following three guiding questions:

For the first question, the RAND team purposely avoided trying to determine what technologies DoD should pursue or how DoD currently measures up to other countries in terms of AI uptake because that was outside their mandate. Rather, the team assessed what DoD decisionmakers need to know about AI.

For the second question, the team assessed the posture of DoD for AI using a framework of six dimensions (Table 1).

What Decisionmakers Need to Know About AI

Examining the implications of AI for DoD and strategic decisionmaking requires taking a holistic view that considers three critical elements and how they interact:

The technologies and capabilities space: This includes the approaches, such as algorithms, that underpin current AI solutions. Although many technologies underpin AI, current interest (and hype) is fueled by advances in a small number of areas, like deep learning.

But success in deep learning requires large data sets. Deep learning algorithms tend to be highly specific to the applications for which they were designed, and demonstrated applications have tended to be commercial. What's more, VVT&E remains very challenging across the board for all AI applications, including safety-critical military applications.

The investment space and time horizon: In addition to the investments needed to develop or acquire AI technologies across the spectrum of applications, success in AI requires the following three other kinds of investments:

Finally, to manage expectations and ensure continued support, it is important to set realistic goals for the lead times that AI will need to progress from demonstrations of what is possible to full-scale implementations in the field. The RAND team's analysis suggests that, as a rule of thumb, sustained DoD investments made as of the time of the original report's publication (2019) can be expected to yield at-scale deployments in the

Of course, DoD can expect and should pursue faster progress for some applications, even within operational AI. However, these timelines reflect the RAND team's assessment of what reasonable expectations are, given the current state of the technology and taking into account the four factors discussed previously: operating environment, resources, tempo, and implications of failure.

Overall, the RAND team found that, despite some positive signs, DoD's posture is significantly challenged across all dimensions of the posture assessment.

Despite some positive signs, DoD is poorly positioned across all dimensions to effectively leverage and scale AI. The report offered a set of recommendations, both strategic and tactical, for moving forward.

The RAND team's recommendations to DoD are as follows: