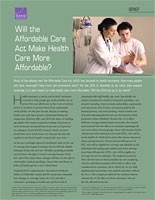 Much of the debate over the Affordable Care Act (ACA) has focused on health insurance: How many people will have coverage? How much will premiums cost? Yet the ACA is intended to do more than expand coverage; it is also meant to make health care more affordable. Will the ACA live up to its name?

Health insurance is not an end in itself. Insurance is meant to help people get needed health care at prices they can afford and, in the event of serious injury or accident, to protect them from catastrophic medical bills. For the past decade, sharply escalating health care costs have posed a substantial burden for Americans. Between 2001 and 2010, the share of working-age adults with medical expenses totaling 10 percent or more of income increased from 21 percent to 32 percent.[1] According to recent RAND research, family incomes would have risen much more over the past decade had employers not faced steeply rising health care costs. [2]

As the new exchanges open for enrollment, data on the cost of coverage have begun to emerge, but we still lack reliable estimates of how the new law will affect spending on health care by those who gain or switch coverage because of the law[3] and of the impact these changes will have on the risk of catastrophic medical spending, a factor that contributes to half of all bankruptcies in the United States.

We found that consumers will be less likely to incur catastrophically high medical costs after implementation of the ACA.

Using RAND's Comprehensive Assessment of Reform Efforts (COMPARE) model, RAND researchers estimated how changes in coverage under the ACA will affect consumers' spending on health care and their risk of catastrophically high health care costs. Specifically, the analysis examined two kinds of consumer spending — out-of-pocket spending, which includes deductibles, copayments, and coinsurance (the fraction of expenses paid by the insured person), and total spending, which includes out-of-pocket spending plus the net cost of premiums (total premiums minus subsidies). Because the ACA offers different coverage options based on income, the research team assessed how the effects on consumer spending will vary across three income groups: those with incomes below 138 percent of the federal poverty level (FPL), who will be newly eligible for Medicaid in states that choose expansion; those earning between 138 percent and 400 percent of FPL, who will be eligible for coverage and subsidies in the individual and small group markets; and those earning more than 400 percent of FPL, who will be eligible for coverage but not for subsidies. The analysis focused on 2016, the first year in which penalties for not complying with the individual mandate will be fully in effect, and considered two scenarios: one in which the ACA is fully implemented and another that predicts outcomes without the ACA. This comparison allowed the research team to estimate the ACA's effect on those consumers who are directly affected by the law.

Effects on Consumer Spending Will Vary (2016)

Most Consumers Will Spend Less on Health Care, but Effects Will Vary

Consumers with Incomes Below 138 Percent of FPL. Consumers in this group will see an estimated decrease in out-of-pocket spending under the ACA, but effects on total spending will vary (Figure 1).

Consumers with Incomes Between 138 Percent and 400 Percent of FPL. Consumers in this group will also see declines in out-of-pocket spending, but, again, effects on total spending will vary (Figure 2).

Individuals who transition from being uninsured to being covered through the ACA-regulated individual market will see a decrease in out-of-pocket spending (from $1,969 to $1,224), but their total spending will increase (from $1,969 to $3,536) because they will be paying health insurance premiums for the first time.

Consumers with Incomes Above 400 Percent of FPL. Consumers in this group can also expect to see lower out-of-pocket spending. Their total spending, however, will increase (Figure 3).

Those who transition from being uninsured to having coverage through the individual exchange will experience the largest decrease in out-of pocket spending — from $5,368 to $1,227, a decrease of $4,141. However, total spending for this group will increase from $5,368 to $7,202 because they are now responsible for paying premiums and will be ineligible for government subsidies to offset the costs of their premiums.

Those who transition from the old individual market to the new individual exchange will also see a decline in out of-pocket spending, from $1,185 to $717; however, their total spending will increase from $4,849 to $5,295. This increase in total spending is driven partly by our prediction that many in this income group will buy the most-expensive ("platinum") plans, which are typically more comprehensive than their current plans, and partly by the ACA's provision that insurers cannot deny coverage, which means that larger numbers of less-healthy people will be entering the insurance pool, often driving up premiums.

Consumers Will See a Reduced Risk of Catastrophic Medical Spending

In cases in which consumers will spend more overall on health care under the ACA, what is the advantage of having health coverage? As noted earlier, health insurance is intended to do more than expand access to care: It is also intended to shield consumers from catastrophically high medical bills.

Nonexpansion of Medicaid Would Negate Beneficial Effects for the Lowest-Income Populations: Estimates from Texas and Florida

To examine this issue, the RAND team's analysis focused on the effects of nonexpansion for both of these income groups — those below 100 percent of FPL and those between 100 and 138 percent of FPL. The analysis assumed that the ACA was in effect, but under two alternative scenarios: one with Medicaid expansion and one without.

In addition, not expanding Medicaid in Florida and Texas will increase the risk of catastrophic medical spending for individuals in both income groups. This increased risk will be highest for those with the lowest incomes — below 100 percent of FPL — because they are not eligible for subsidies in the new exchanges and are thus more likely to remain uninsured.

Ultimately, whether the ACA will make health care affordable requires a value judgment. For most lower-income individuals, total spending will fall as a result of the coverage they obtain under the ACA. However, for some higher-income people who become newly insured through the individual market (especially those not eligible for federal subsidies), total spending will increase because they now must pay health insurance premiums for the first time. However, their premiums will buy them the benefits associated with health coverage, such as access to free preventive care and regular wellness visits, and will also better protect them from catastrophic medical costs.

Of these, about 16.5 million consumers who become newly insured in the ACA-regulated individual market will spend more overall on health care because they will pay premiums for the first time; however, they will experience reduced risk of spending more than 10 or 20 percent of annual income on medical costs.

In Texas and Florida, which are both opposed to expanding Medicaid, people with incomes below 100 percent of FPL will spend more on health care and face a higher risk of incurring catastrophic medical costs if Medicaid is not expanded.

[1] Collins SR, Doty MM, Robertson R, and Garber T, Help on the Horizon: How the Recession Has Left Millions of Workers Without Health Insurance, and How Health Reform Will Bring Relief — Findings from The Commonwealth Fund Biennial Health Insurance Survey of 2010, New York: The Commonwealth Fund, publication no. 1486, March 2011. http://www.commonwealthfund.org/~/media/Files/Surveys/2011/1486_Collins_help_on_the_horizon_2010_biennial_survey_report_FINAL_31611.pdf

[3] The vast majority of people who currently receive coverage through their employers will continue to do so after the ACA is fully implemented.

[4] A transitioning person is defined here as one who would be expected to have a different insurance status in 2016 than he or she would have in 2016 without the ACA.

[5] Because of variations in state-level eligibility for Medicaid, a small number of people with incomes between 138 percent and 400 percent of FPL are included in this group.