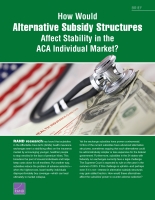 How Would Alternative Subsidy Structures Affect Stability in the ACA Individual Market? 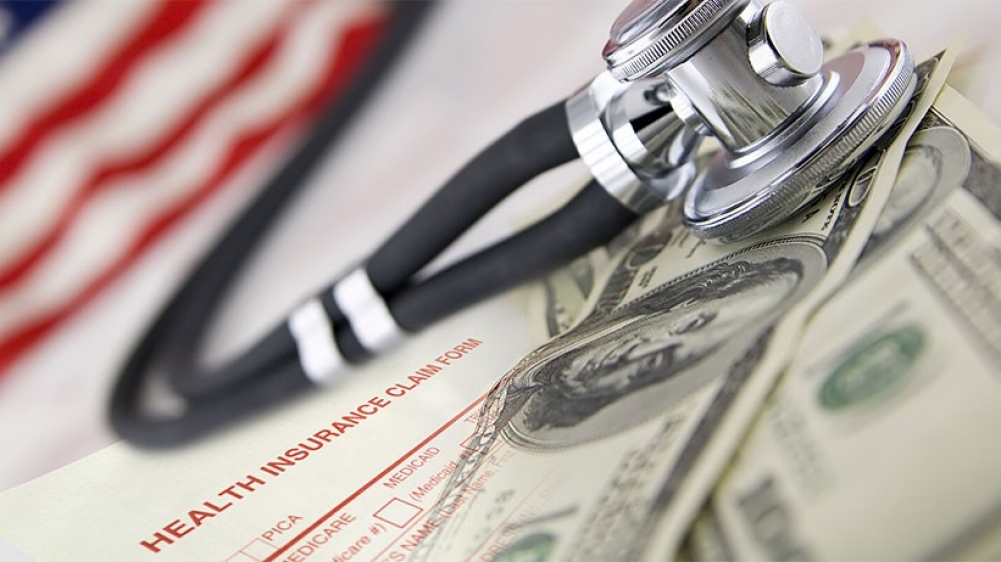 RAND research has found that subsidies in the Affordable Care Act's (ACA's) health insurance exchanges exert a stabilizing effect on the insurance market by encouraging younger, healthier people to stay enrolled in the face of premium hikes. This broadens the pool of insured individuals and helps keep costs down for all enrollees. Put another way, subsidies reduce the problem of adverse selection — when the highest-cost, least healthy individuals disproportionately buy coverage — which can lead ultimately to market collapse.

Yet the exchange subsidies have proven controversial. Critics of the current subsidies have advanced alternative structures, sometimes arguing that such alternatives could be administratively simpler or less expensive for the federal government. Furthermore, subsidies in the 34 states with federally run exchanges currently face a legal challenge. The Supreme Court is expected to rule on the case in the summer of 2015. If this challenge is upheld — and perhaps even if it is not — interest in alternative subsidy structures may gain added traction. How would these alternatives affect the subsidies' power to counter adverse selection?

In the individual health insurance market, people buy coverage directly from insurers. The ACA established online marketplaces (exchanges) for people to buy insurance in this market. The ACA offers subsidies in the form of tax credits to help lower-income individuals and families buy coverage through the marketplaces. Individuals whose incomes fall between 100 percent and 400 percent of the federal poverty level (FPL) are eligible for subsidies if they don't have affordable coverage from another source.

One of the most commonly proposed subsidy alternatives is a premium support (or "voucher") approach, in which the government pays enrollees a fixed dollar amount to buy insurance, and enrollees are responsible for premium costs above the fixed amount. Another alternative would require enrollees to pay a fixed percentage of the total premium, with the government paying the additional amount. The fixed-percentage-of-premium approach is common in the employer insurance market, and may be more familiar than either the current tax credit or a premium support approach to most enrollees. The infographic (opposite) summarizes the differences among the current ACA tax credit, the premium support approach, and the fixed-percentage-of-premium approach.

Premiums Are More Sensitive to Young Adult Enrollment Under the Alternatives

To test the effects of the alternatives on adverse selection, RAND researchers used the COMPARE microsimulation model to estimate the effect of the current subsidy structure and the premium support and fixed-percentage-of-premium alternatives. The analysis focused on how premiums vary as the share of young adult enrollees changes. The team focused on this population because it has received attention as a relatively healthy, low-cost population, whose presence in the market may keep the risk pool strong and premiums lower.

To gauge the effect of the subsidy structure — as opposed to the subsidy generosity — and to enable an apples-to-apples comparison of the approaches, the researchers assumed that the subsidy amount is equivalent for all three approaches when the share of young adults in the market is 27.2 percent, which is the estimated current share in 2015.

The analysis found that the alternative subsidy arrangements could cause premiums to become more sensitive to the age mix of enrollees, especially the share of young adult enrollment (see figure). If the share of young adults decreases by 1 percentage point, premiums would rise 0.44 percent under the ACA tax credit structure. In contrast, premiums would increase by 0.61 percent in the fixed-percentage-of-premium scenario and by 0.73 percent in the premium-support scenario. 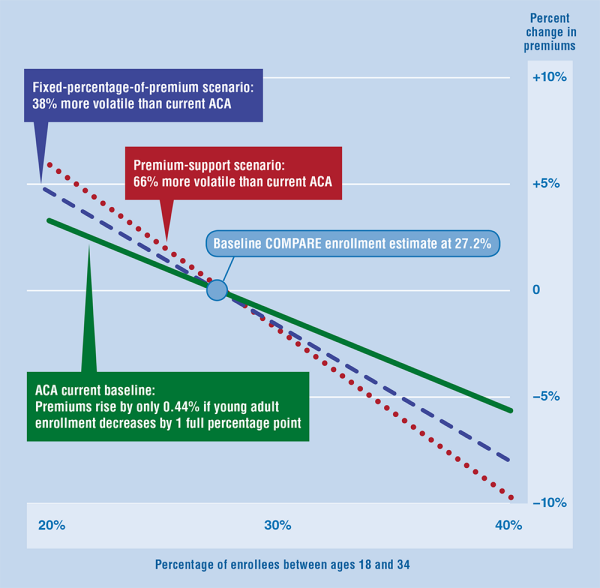 This figure shows the change in individual market premiums that could be expected as the share of young adult enrollees increases or decreases, under three alternative assumptions about the structure of premium subsidies. The steepness of the line indicates premium change volatility. The rate of change in premiums is much more volatile under alternative subsidy arrangements, such as with the fixed-percentage-of-premium scenario — 38% more volatile — and the premium-support scenario — 66% more volatile. All estimates are derived from the COMPARE model and represent calendar year 2015.

Who bears the risk of premium increases?

The dotted line shows the premium-support or voucher approach, in which each individual receives a fixed dollar amount that can be used to purchase health insurance coverage. Enrollees contribute the cost of premiums minus government contribution and, therefore, assume all the risk of premium increases. Voucher amounts also vary by age and income.

The dashed line shows the fixed-percentage-of-premium scenario, in which an alternative subsidy in which both individuals and the federal government contribute a fixed percentage to the premium and each individual's percentage contribution varies with income and age. The risk of premium increases under this scenario is assumed jointly by both the federal government and the enrollee.