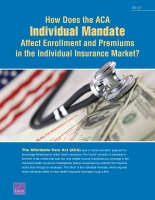 How Does the ACA Individual Mandate Affect Enrollment and Premiums in the Individual Insurance Market? 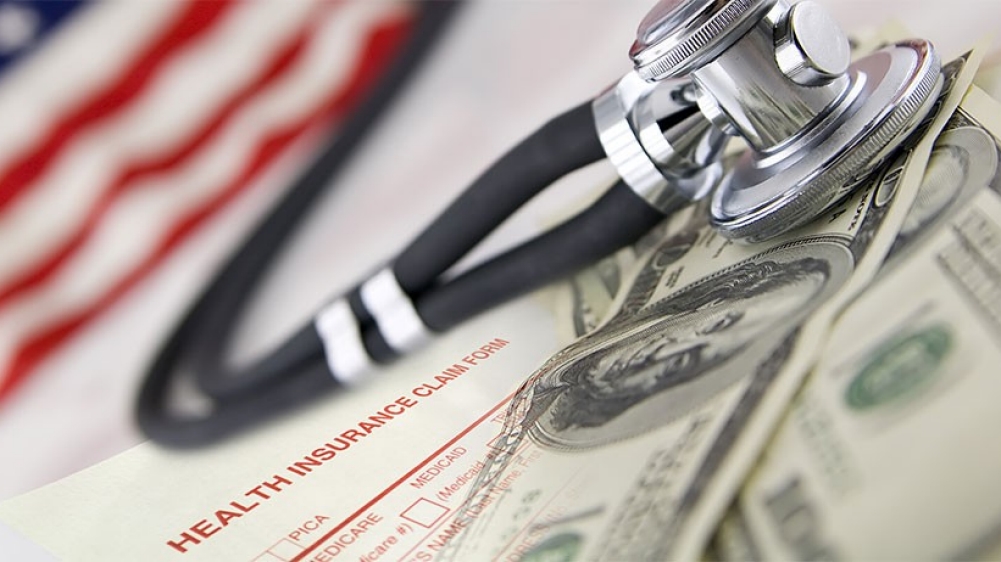 What is the individual mandate?

The individual mandate remains one of the ACA's most politically charged provisions. It survived a Supreme Court challenge in 2012, when the Court ruled that it was a tax and therefore constitutional. However, numerous policy alternatives have proposed to amend or abolish the individual mandate, and some commentators have claimed that the mandate is unnecessary to advance the ACA's goal of near-universal health coverage. (See Avik Roy, Transcending Obamacare: A Patient-Centered Plan for Near-Universal Coverage and Permanent Fiscal Solvency, Manhattan Institute for Policy Research, 2014, for an example of the former, and Peter Ubel, "Do the Obamacare Insurance Subsidies Make the Individual Mandate Unnecessary?" Forbes, March 25, 2013, for an example of the latter.)

If not insured, pay whichever is greater: $95 or 1% of income

How would eliminating the individual mandate affect coverage and costs under the ACA?

The individual mandate remains one of the ACA’s most politically charged provisions.

To address this question, a RAND team used the RAND COMPARE microsimulation model to estimate the effect of eliminating the individual mandate on the number of insured and premium prices in the individual market, assuming that other provisions of the ACA remain unchanged.

Eliminating the individual mandate would...

Reduce enrollment in the individual market

Adult enrollment would fall by 4 million

19.8 million currently enrolled in the ACA would decrease by 20% to 15.8 million

Reduce the share of young adults in the individual market

A higher share of older, less healthy enrollees would remain

5.4 million currently enrolled in the ACA would decrease by 27% to 3.9 million

Reduce the number of insured Americans by 8 million 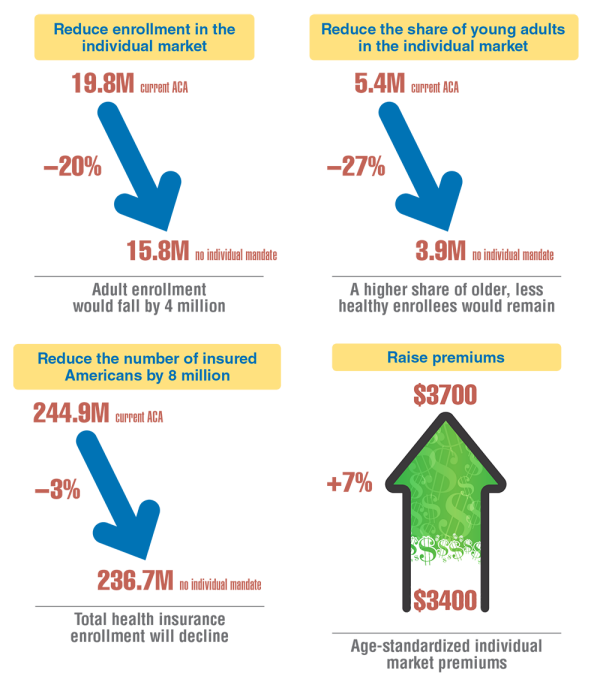 Enrollment and premiums for 2015 as estimated in the COMPARE model under the ACA and under an alternative scenario in which it is assumed there is no individual mandate. Estimates reflect enrollment and premiums for all ACA-compliant individual-market enrollees, including those enrolled on and off the marketplaces. Age-standardized premium reflects the silver premium for a 40-year-old nonsmoker.