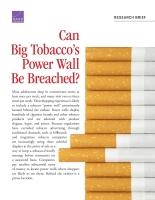 Most adolescents shop in convenience stores at least once per week, and many visit two to three times per week. Their shopping experience is likely to include a tobacco "power wall" prominently located behind the cashier. Power walls display hundreds of cigarette brands and other tobacco products and are adorned with product slogans, logos, and prices. Because regulations have curtailed tobacco advertising through traditional channels, such as billboards and magazines, tobacco companies are increasingly using these colorful displays at the point of sale as a way to keep a tobacco-friendly message before consumers on a sustained basis. Companies pay retailers substantial sums of money to locate power walls where shoppers are likely to see them. Behind the cashier is a prime location.

Public health experts warn that exposure to power walls can make adolescents more likely to smoke in the future, even if they aren't conscious of the exposure. Could increased regulation of the tobacco power wall help to buffer adolescents from its negative influence on their health and well-being? RAND has undertaken a major research initiative to answer this question using a one- of-a-kind research resource, the RAND StoreLab.

The RAND StoreLab, located in a Pittsburgh office building, is a replica of a typical midsized convenience store. It stocks about 650 different products. The space includes shelving units and end-of-aisle displays, freezers, refrigerators, a coffee maker, and a pastry display. Just like most convenience stores, a large tobacco power wall sits behind the cashier counter. Only people who volunteer for research studies can shop in the store. RAND is using the StoreLab to answer a number of critically important questions about how to minimize the impact of the tobacco-rich retail environment on adolescent and adult tobacco use, including research on the tobacco power wall. 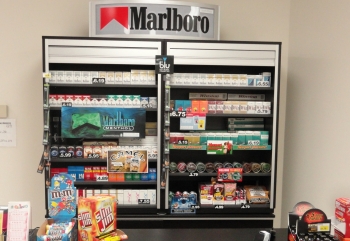 Power wall behind the cashier 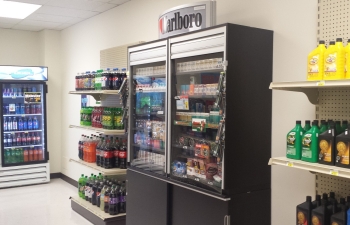 Power wall located on side wall 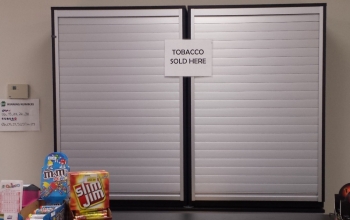 In a recent study, the RAND StoreLab was used to evaluate whether moving the power wall from behind the cashier or hiding it from view would reduce adolescents' future susceptibility to smoking. About 80 adolescents were randomly assigned to shop in one of three "versions" of the StoreLab (241 adolescents in total participated in this study). The first version left the power wall in its usual position, behind the cashier. The second version moved the power wall to a side wall, still visible in the store but placed in an out-of-the-way location. The third version hid the power wall from view, with only a plain black-and-white sign indicating that tobacco products were sold at the store.

Before shopping in their assigned version of the StoreLab, adolescents completed a questionnaire asking about their convenience store shopping habits, their exposure to tobacco advertising in such stores, and their use of tobacco products. They were then given $10 to spend in the store however they wanted.

When study participants finished shopping, they filled out a questionnaire that measured their susceptibility to future smoking. Researchers compared these post-shopping responses across experimental conditions.

Adolescents who shopped in a store in which the power wall was hidden were about half as likely to report that they would smoke in the future, compared with those whose shopping experience included a power wall behind the cashier. Locating the power wall along a side wall had no effect on adolescents' susceptibility to future smoking.

Being susceptible to the idea of smoking in the future is strongly linked with actually beginning to smoke. The outcomes of this study suggest that hiding the power wall is a promising regulatory option for reducing the impact of this type of tobacco advertising. But how lasting are the effects? 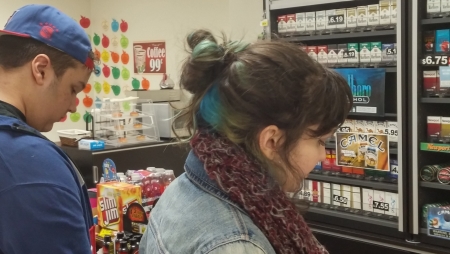 Most adolescents spent about three minutes in the RAND StoreLab, so the study results cannot be generalized beyond the slice of time that they capture. But results from this StoreLab study demonstrate the potential effects of hiding the power wall in a critical moment when it likely has its most potent effects on teens. Other studies are needed to determine whether there are longer-term effects to curtailing this type of advertising.

Adolescents who shop in convenience stores multiple times per week have ample opportunity to be exposed to diverse forms of tobacco advertising. Moderating the effects of exposure could generate important health payoffs.