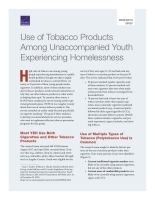 Use of Tobacco Products Among Unaccompanied Youth Experiencing Homelessness

High rates of tobacco use among young people experiencing homelessness is a public health problem, though one that is largely overlooked in tobacco-control efforts. As many as 70 percent of these young people smoke cigarettes. In addition, most of these smokers use other tobacco products. Little is known about how or why they use other tobacco products or what works in helping them quit. To examine these issues, a RAND team conducted a survey among youth experiencing homelessness (YEH) in Los Angeles County about their use of various tobacco products. The survey extended an earlier study focused specifically on cigarette smoking.[1] The goal of these studies is to develop recommendations for service providers who want to implement effective tobacco prevention programs for this group.

Most YEH Use Both Cigarettes and Other Tobacco Products

The research team surveyed 469 YEH between August 2017 and April 2018, recruited from 25 service sites (e.g., shelters, drop-in centers) and street sites (e.g., sidewalks, parks, alleys, beaches) throughout Los Angeles County. Youth were eligible for the survey if they were ages 13–25 and had used any type of tobacco or nicotine product in the past 30 days. The survey indicated that in the past 30 days

Use of Multiple Types of Tobacco (Polytobacco Use) Is Common

The research team sought to identify distinct patterns in the use of nicotine products other than cigarettes. Four main patterns of use were identified (Figure 1):

These results highlight the extent to which YEH use multiple tobacco products. Thus, it is important that programs to reduce tobacco use in this population focus not only on cigarette smoking but also on other tobacco products.

Motivations for Use: Similarities and Differences Across Products

The survey asked youth to indicate the reasons they used different types of tobacco products. Results indicated the following:

These results suggest that cessation counseling efforts might benefit from some tailoring to the specific motivations associated with use of that product.

The team sought to understand the extent to which youth are motivated to quit their use of different tobacco products, as well as their perceptions of the harmfulness of these products. Results indicated that

Implementing Programs to Reduce Tobacco Use in Service Settings

YEH are often exposed to others who are using tobacco products. Survey results suggest that being around others who use tobacco products strongly predicts youth tobacco use; for natural cigarettes, ENDS, LCCs, cigars, and hookah, youth who reported being often or sometimes around others who used the product were three to five times more likely (depending on product) to report using it in the past month, compared with those who were hardly ever or never around others who used the product. Service providers can counteract these social influences by making relatively small changes, including asking youth during intake about use of all tobacco products, training staff to deliver brief cessation counseling, having printed materials on tobacco use and quitting available in waiting rooms, and establishing a tobacco-free outdoor area at the service site. Health education campaigns delivered in service settings may have the added benefit of countering the potential impact of tobacco advertising on intentions to continue using tobacco products among YEH. More information for service providers on how to reduce tobacco use among YEH is available in Reducing Tobacco Use Among Young People Experiencing Homelessness: Recommendations for Service Providers, by Erika Litvin Bloom, William G. Shadel, and Joan S. Tucker, TL-A1036-1, 2021 (available at www.rand.org/t/TLA1036-1).