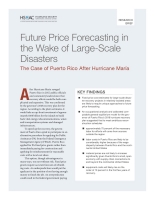 Future Price Forecasting in the Wake of Large-Scale Disasters

The Case of Puerto Rico After Hurricane María

After Hurricane Maréa ravaged Puerto Rico in 2017, public officials and community leaders knew that recovery efforts would be both complicated and expensive. This was confirmed by the governor's 2018 recovery plan for the region. According to the plan's estimates, it would take an up-front investment of approximately $100 billion for the islands to build back vital energy, telecommunications, water, and transportation systems and damaged infrastructure.

To speed up the recovery, the government of Puerto Rico opted to participate in an alternative procedure for applying for Public Assistance (PA) from the Federal Emergency Management Agency (FEMA). Puerto Rico applied for PA fixed price grants rather than immediately paying for construction and applying for reimbursement for reasonable costs with a local cost share.

This option, though advantageous in many ways, was not without risk. Fixed price grants require accurate forecasts of rebuilding costs. An underprediction would put the applicant in the position of not having enough money to finish the job. An overprediction could result in the federal government paying out millions of dollars more than the amount needed. These risks, especially underprediction, are enhanced in the case of Puerto Rico. First, relevant historical data on which to base estimates for such a large-scale recovery effort were nonexistent. Second, the economy in the region would change significantly once recovery started. A $10 billion average annual investment for ten years in an economy of approximately $100 billion would likely increase the need for a new labor supply. That many people have been emigrating from the region since 2006 only compounds this potential problem.

This brief walks through the FPF method developed by the research team and demonstrates its use by presenting estimates related to construction for the 2018 Puerto Rico recovery plan. This method might be of interest to others tasked with generating accurate fixed price cost estimates after a large-scale event in a region with a relatively isolated market.

Knowing the number and availability of workers and skill types needed for large-scale disaster recovery was a necessary first step in generating cost estimates. To begin this task, the research team translated the governor's 2018 recovery plan into direct spending in different sectors: construction, administrative services, management, and education. The team then estimated the economic consequences of a set of scenarios using potential implementation approaches for the recovery plan. They used a quantitative economic model to estimate the plan's effects on employment.

Next, the team translated the increases in employment into increases in demand for critical occupations. With an understanding of these occupational needs, the team compared demands induced by the recovery spending with the current distribution of occupations in Puerto Rico.

Results from this part of the analysis suggested that construction efforts would make up approximately half of the expected recovery expenditures. Importantly, many skilled construction occupations would need to increase 200 to 500 percent. More generally, the construction workforce would need to nearly double. Given the skills mix and the scale of the effort, the team calculated that approximately 75 percent of the increased workforce would need to come from outside sources, most likely workers coming to Puerto Rico from the continental United States. The additional costs of lodging and per diem would have to be factored into the overall costs of recovery.

At the time of the analysis, there was no implementation plan for these recovery efforts. Knowing the scale and timing of the recovery effort is important because these factors could have a sizable effect on the economy and price of materials, equipment, and labor. Trying to push too many recovery dollars into a small economy could result in inflation and lessen the value of fixed price grants. Therefore, the team developed an expenditure simulator tool using historic obligations for other hurricane recovery efforts since 2000. The tool generated potential spending paths across years and PA categories.

To reflect the unique characteristics of Hurricane Maréa, the team made two additional adjustments. First, given the limited amount of PA expenditures in the first few years following Hurricane Maréa, researchers included only spending paths for which less than 25 percent of the overall spending was completed in the first two years. Second, they included capacity constraints to ensure that there were no unreasonable amounts of spending in a particular year for any potential spending path (e.g., $2 billion in year one; $4 billion in year two; $6 billion in year three; $8 billion in year four; and in subsequent years a 5-percent growth in capacity). If the simulated spending path predicted an expenditure in capacity excess, the excess capacity was added to the subsequent year.

The CGE is built on several simplifying assumptions. First, Puerto Rico is assumed to be a small, open economy. This means that changes in demand for goods and labor in Puerto Rico are likely not going to have an impact on the rest of the world. Firms are perfectly competitive and price takers. Local prices adjust to clear markets, which means that the quantity supplied equals the quantity demanded. Local capital and labor endowments also adjust based on elasticities estimated from the literature and current capital and labor prices.

Once the CGE model was calibrated to the most recent data, the team simulated the effects that different disaster recovery expenditure scenarios—baseline, unconstrained, aggressive, and super-aggressive—would have on prices of labor, materials, and equipment in Puerto Rico during recovery.

Figure 2 presents average wages under the four expenditure scenarios. These are local wages and do not incorporate any importation of labor that may be necessary. Importantly, approximately 70 to 80 percent of construction in the model was imported from the continental United States, depending on the scenario. Because all construction is locally produced, imported construction is best thought of as contractors performing construction in Puerto Rico (i.e., workers from the continental United States who relocate to Puerto Rico) whose labor is outside the local labor market.

The results for the first three expenditure scenarios show that wages were likely to rise on the order of 15 to 25 percent in the first few years but are likely to fall after the labor market adjusts. For the super-aggressive set of expenditures, wages during the initial surge could rise as much as 35 to 40 percent, depending on how aggressive expenditures are in the first two years. However, those plans have significant price variations over the longer horizon, because when prices drop, workers are likely to go to non-construction sectors for employment. This is a result of the transition dynamics assumed for capital and labor adjustments and not the underlying CGE model. It is worth noting that while FEMA was ambitious to get money flowing into the economy quickly, the requisite plans and cost estimates took considerable time to develop. Consequently, nothing approaching the more aggressive spending plans came to pass.

Figure 3 shows the estimated rental prices for equipment. Like wages, equipment rental prices are likely to increase on the order of 10 percent in the first few years of rebuilding but then fall nearer to prerecovery prices for all but the super-aggressive scenario.

Figure 4 provides the results for material prices across all sets of expenditure plans. Material prices are likely to increase approximately 1 percent in the first three scenarios because of the small open economy assumption.

Future Adaptions of the Model

A combination of the occupational analysis and calibrated CGE model as demonstrated in this study can be readily adapted to other areas of the United States that have experienced large-scale natural disasters. As is the case for Puerto Rico, the labor component is likely to be the most important component in determining whether an FPF is necessary for a specific community. Markets for materials and equipment can readily respond to market incentives, but labor is a more complex case because the need for housing and other supports might not be met in the short term for damaged communities.