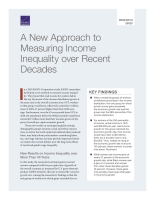 A New Approach to Measuring Income Inequality Over Recent Decades

In a 2020 RAND Corporation study, RAND researchers developed a new method to measure income inequality. They found that, had income for workers below the top 10 percent of the income distribution grown at the same rate as the overall economy since 1975, workers in that group would have collectively earned $2.5 trillion more in 2018, 67 percent higher than their 2018 earnings. Furthermore, over the 43-year period from 1975 to 2018, the population below the 90th percentile would have earned $47 trillion more had their incomes grown at the pace of overall per capita economic growth.

These new results on earnings inequality among demographic groups (women, racial and ethnic minorities), as well as the novel analytical methods that produced them, may help inform policymakers considering labor, tax, and wage reforms and may provide important historical context for current debates over the long-term effects of racial and gender wage inequality.

New Results on Income Inequality over More Than 40 Years

In this study, the researchers estimate gains in actual income compared with the per capita rate of growth of the overall economy, as measured by U.S. gross domestic product (GDP); hereafter, this rate is termed the economic growth rate. Among the researchers' findings is that the only group of workers for which gains exceeded the economic growth rate was the group near the 99th percentile of the income distribution. Figure 1 illustrates how groups of workers at different percentiles in the income distribution have fared. The horizontal axis shows actual income—in other words, income for all years is adjusted to represent amounts in 2018 dollars—in the orange and blue dots (using a logarithmic scale). The vertical axis shows seven points in the overall income distribution, those at the 25th, 50th (median), 75th, 90th, 95th, and 99th percentiles, plus the mean for the top 1 percent. The lines trace out how much actual income increased for each group between 1975 and 2018; income growth, measured as moving from left to right along each line, was positive for all groups. Each black dot shows a counterfactual scenario of what that group's income would have been had it increased at the economic growth rate. All dollars presented in this brief are actual 2018 dollars and were calculated using the Personal Consumption Expenditures Price Index.

An Innovative and Intuitive Approach to Measuring Income Inequality

These new, intuitive estimates represent a methodological innovation in measuring income inequality. Other common measures, such as the Gini coefficient or ratios of different parts of the income distribution (for instance, the ratio of the bottom 10 percent to the top 10 percent), can provide some indication of the level of inequality and the shape of inequality, respectively. However, comparisons of these numbers over time do not indicate equity of the income growth and how the inequality changed over time. That is to say, although such measures can indicate differential growth rates, they do not indicate what an equitable rate would have been.

In contrast, the approach described in this brief compares (1) the actual growth in income over some period of interest for a given group at a given percentile in the income distribution and (2) what current income would have been for that group if it had grown according to some economic growth rate (the counterfactual). In this approach, inequality can be expressed for each group as the difference between these rates of growth.

Benefits of Using This New Measure of Income Inequality

Frequently, when policymakers assess the health of an economy, their first measure of interest is the growth rate of GDP because it provides a view of the degree to which the economy as a whole has grown. Policymakers or other interested groups can use the measure developed in this study to compare actual income growth against any rate of economic growth. As noted earlier, in this study, the researchers chose a measure of the rate of growth of the overall economy—the change in the per capita rate of growth of U.S. GDP. Given the public's familiarity with GDP, this provides a useful benchmark for how individual workers' incomes have changed over time. However, the economic growth rate can be any rate that might interest policymakers or others. This ability to generate multiple measures of inequality for a given group is a new and intuitive way to allow people to think clearly about income growth compared with other growth rates that might be specifically relevant to them. Examples might include the growth rate of consumer prices or health care prices or the income growth of a specific group (say, the top 1 percent of earners).

The working paper on which this brief is based also includes new inequality estimates for a wide variety of subgroups in the labor market, including racial and ethnic minorities, workers in different age groups, those with different levels of education, and urban and rural workers. Figure 3 presents the researchers' measure of inequality over time for three groups based on racial identity—White, Black, and all others—split further by gender, at the median (50th percentile) of the income distribution.

Overall, median actual income for full-time, full-year workers between ages 25 and 54 increased by 17.4 percent of the economic growth rate between 1975 and 2018. This is reflected in the income growth of all the subgroups contributing to the total; only White women achieved income growth equal to 50 percent of their economic growth rate. White and Black men fared poorest, at 12 percent and 16 percent, respectively. Men in the combined group of "other" racial identities fared somewhat better, at 30 percent. The highest rates of income growth were among women. White women saw income grow at nearly 57 percent of the economic growth rate, while Black women saw a gain of 41 percent and women from other racial identities gained 46 percent. However, these gains only partially close large initial gaps in income by gender. There were large earnings gaps between women and men, and the faster growth rate for women only partially narrowed the gender gap.[1] The best outcome in terms of reducing the gender gap in income was among women in the other race category, who reached a level of actual income in 2018 that was equal to the income of "other" men in 1975. Incomes for Black women in 2018 similarly surpassed the level of Black men in 1975 at the median.

The Challenge of Accurately Measuring Income Among the Highest Earners

Another important methodological contribution of the study is a new method for correcting income measures in microdata to facilitate conducting the subgroup analyses presented in the previous section. Survey data on worker income have long been required to balance two important goals: being useful to researchers and policymakers and protecting the privacy of individual respondents. The survey data used in this research are from the Current Population Survey (CPS)'s Annual Social and Economic Supplement, which is an annual survey of about 100,000 individuals. Because having a very high income is a rare occurrence, incomes in the CPS data are topcoded (i.e., are replaced if they exceed some maximum level) to protect the privacy of individuals who might otherwise be identifiable through combinations of variables in the data, such as age, gender, geographic location, and income.

There is also evidence that individuals with high incomes systematically underreport their incomes in surveys, as described in a 2019 article by Christopher R. Bollinger and colleagues in the Journal of Political Economy. This, too, will tend to bias downward measurements of income inequality, even for incomes not affected by topcoding.

A New Approach to Correct for Topcoded Incomes

In this study, the researchers developed and implemented a new process to adjust incomes among high-income individuals so that the CPS data can be used to generate estimates of inequality that are not systematically biased by topcoding. The researchers first obtained detailed statistics from the World Inequality Database (WID)—a project to accurately estimate the distribution of incomes among the richest individuals and families using tax filings—that summarize the earnings of U.S. households in the top 10 percent of the income distribution. These statistics were used to generate a set of mathematical parameters that accurately describe the shape of the income distribution for this small group of individuals in each year of data from 1975 to 2018. The researchers then used this mathematical function to generate adjusted (estimated) incomes for the highest-income survey respondents in the CPS.

This adjustment results in the income distribution of individuals in the CPS reproducing the income distribution created using the detailed tax records in the WID when the adjusted CPS and WID data are summarized at the same levels (for example, average incomes for the 90th, 95th, and 99th percentiles of the income distribution). Having individual-level data with this property allowed the researchers to use the rich set of demographic characteristics in the individual-level CPS data to generate accurate income inequality estimates for a wide variety of subgroups over time (for example, changes in inequality by race, gender, education level, and whether a person was an active participant in the labor force).