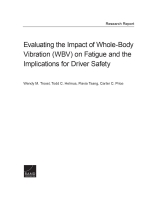 Driver fatigue is a significant contributor to motor vehicle accidents and fatalities, although the exact share of those events attributable to fatigue is still uncertain. In 2013, accidents involving heavy trucks killed more than 3,944 people in the United States, with over 80 percent of those killed not in the truck. Numerous factors contribute to driver fatigue among commercial drivers, including shiftwork schedules; high prevalence of alcohol and substance use; extended hours; comorbid medical conditions, such as pain, and high prevalence of sleep disorders. Many of these factors have been studied extensively in the trucking industry. Whole-body vibration (WBV) is another potential factor that may contribute to driver fatigue, but it has received little attention. Beginning in January 2015, Bose Corporation and AIG commissioned the RAND Corporation to study the link between WBV and driver fatigue. This report summarizes the findings from RAND's systematic review of the literature on WBV and fatigue as well as considers appropriate study designs and methodology that will inform new areas of research focused on improving the safety of truckers and those who share the road with them. The literature review identified 24 studies examining the impact of WBV on fatigue or sleepiness. The majority of studies (n = 18) found a significant association between WBV and fatigue or sleepiness; however, there are several limitations of the existing literature that preclude definitive conclusions regarding the impact of WBV on these outcomes. This report concludes with recommendations for future studies to strengthen the evidence base.

The research described in this report was conducted by RAND Health and RAND Justice, Infrastructure, and Environment.