This report reviews various employment screening policies and procedures to assess how helpful these may be for Air Force sexual assault prevention efforts. Reviewed measures include self-reporting of behaviors, background checks, and personality tests. The report concludes with specific recommendations for improving existing Air Force procedures. 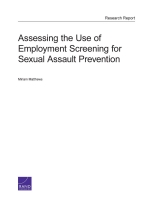 Assessing the Use of Employment Screening for Sexual Assault Prevention

The Air Force is committed to eliminating sexual assault in the service. It is therefore considering how it may adjust its policies and procedures for screening at enlistment to better address an applicant's potential for sexual assault perpetration. This report reviews the current recruitment and enlistment policies and procedures of the Air Force and assesses how these may address sexual assault perpetration, both a history of it and the propensity to commit it in the future. The report also reviews the strengths and limitations of self-report tests that may be used to predict counterproductive workplace behaviors and considers the applicability of these and other assessments, including background checks and personality-based assessments, to sexual assault prevention. The report concludes with recommendations for the Air Force to consider as part of its efforts to prevent sexual assault in the service.

The research reported here was sponsored by the Director of Air Force Sexual Assault Prevention and Response, Office of the Vice Chief of Staff, and the commander of Air Force Recruiting Service. It was conducted within the Manpower, Personnel, and Training Program of RAND Project AIR FORCE.