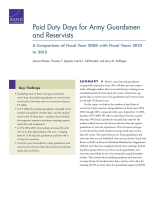 By law, members of the U.S. Army Reserve and Army National Guard must generally train 38 or 39 days per year, respectively, although some serve more or fewer days. Some have suggested, however, that few have served only 39 days or less per year in recent years. To see whether this was so, the authors compared the number of paid days of service for reservists and guardsmen in fiscal years (FYs) 2010–2013 against the number in FY 2000, which serves as a pre–9/11 baseline. To focus on those most likely to serve the statutory minimum, the authors excluded guardsmen and reservists who were mobilized, Active Guard and Reserve, Reserve Individual Mobilization Augmentees, and those who had not yet completed initial entry training, although some serving on other forms of extended active duty were included. The authors focused on paid duty days for the median soldier. In FY 2000, the median guardsman included in the analysis was paid for 39 duty days, the median reservist for 38 duty days. For FYs 2010–2013, these numbers were only slightly larger, by two to six days, depending on the year. Thus, median paid duty days in FYs 2010–2013 still approximated the statutory minimum number of training days. The historical data suggest that, in the future, the typical part-time Army guardsman or reservist who is not preparing to mobilize or serving on some other form of extended active duty will continue to serve somewhere around 38 to 39 days per year.

Excluding Most of Those Serving on Extended Active Duty, the Median Guardsman or Reservist Has Served Only a Few Days More in Recent Years than in FY 2000

This research was sponsored by the U.S. Army Deputy Chief of Staff, G-8, Army Quadrennial Defense Review Office, and conducted by the Strategy, Doctrine, and Resources Program within the RAND Arroyo Center.