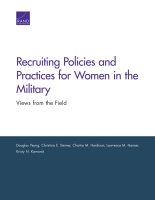 Recruiting Policies and Practices for Women in the Military

Views from the Field

This study identifies approaches for bolstering recruiting of women into the armed services during the years in which ground combat jobs are transitioning to include women. RAND conducted in-depth interviews and focus groups with new recruits, recruiters, and recruiting leadership. Several themes emerged from these discussions. Many female recruits in our focus groups preferred female recruiters and female-specific events. Many male recruits in our focus groups reported not being influenced by the policy change to open combat jobs to women. Recruiters and recruits in our focus groups reported dissatisfaction with what they view as burdensome administrative requirements. Both recruiters and recruits recommended launching advertising campaigns showing women serving alongside men in a wide range of military jobs, and debunking stereotypes of military service. Finally, commanders of the recruiting services reported concern over resources available to them in the current environment. We recommend that resources be set aside to specifically target outreach to women, that the services increase the proportion of recruiters who are women and increase their visibility at recruiting events, and that the services work to reduce administrative burdens on recruiters and recruits.

This research was sponsored by the Office of the Under Secretary of Defense for Personnel and Readiness (OUSD/P&R) and conducted within the Forces and Resources Policy Center of the RAND National Defense Research Institute, a federally funded research and development center sponsored by the Office of the Secretary of Defense, the Joint Staff, the Unified Combatant Commands, the Navy, the Marine Corps, the defense agencies, and the defense Intelligence Community.