Florida's Miami-Dade and Broward counties are vulnerable to flooding and intrusion of saltwater into drinking water wells as a consequence of sea level rise, changes in precipitation, and the distribution of future asset growth across the region. The authors developed an integrated groundwater and economic model and decision support tool to help regional planners and decisionmakers focus mitigation actions on the most vulnerable areas. 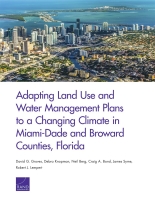 Adapting Land Use and Water Management Plans to a Changing Climate in Miami-Dade and Broward Counties, Florida

Florida's Miami-Dade and Broward counties are vulnerable to flooding and intrusion of saltwater into drinking water wells as a consequence of sea level rise (SLR), changes in precipitation, and the distribution of future asset growth across the region. It is uncertain how these drivers will evolve in the future, so it is important to understand the risks, what areas are most at risk and why, and possible ways to mitigate the risks. Looking out to the 2040 time frame, the analysis linked two groundwater flow simulation models developed separately for the two counties with a simple economic model of asset values as a function of groundwater levels and the location of the saltwater-freshwater interface. Adaptation opportunities were evaluated against a number of climate hazards and future projections of asset growth. The results demonstrate that vulnerability to climate change is not constrained to high-value coastal development but also includes inland areas where groundwater is shallow and wetter rainfall patterns could cause flooding. The region's vulnerability to both SLR and increased precipitation is cause for concern, but targeted actions, such as focusing development on higher ground, could reduce further exposure of assets and mitigate effects of saltwater intrusion on drinking water supplies.

Both Broward and Miami-Dade counties are already vulnerable to flooding

The potential for saltwater intrusion into drinking water wells is concerning