In 2014, the Army established the Cyber career field as a basic branch, which includes the 17C military occupational specialty for enlisted cyber operations specialists. These soldiers require extensive training, and Army leadership is concerned that they will be lured away by lucrative jobs in the civilian labor market. This report describes findings that will help inform the Army's strategy for retaining these 17C soldiers. 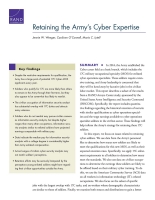 Despite the Restrictive Requirements for Qualification, the Army Has a Potentially Large Pool of Suitable 17C Cyber MOS Applicants Every Year

This research was sponsored by the Commanding General of the United States Army Intelligence and Security Command and conducted by the Personnel, Training, and Health Program within the RAND Arroyo Center.