The U.S. armed forces must be prepared to deploy to a wide range of locations and confront adversaries that span the threat spectrum. This report reviews selected findings from a study of Army and joint anti-access and area denial challenges and proposes a joint approach to countering these threats in future operations. 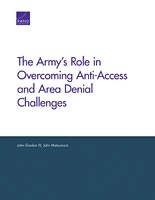 The Army's Role in Overcoming Anti-Access and Area Denial Challenges

The U.S. armed forces must be prepared to deploy to a wide range of locations and confront adversaries that span the threat spectrum from poorly armed bands to peer-level foes. In future operations, the United States is also likely to face a range of anti-access and area denial threats that require a joint or combined response. Anti-access challenges prevent or degrade a force's ability to enter an operational area and can be geographic, military, or diplomatic. Area denial challenges are threats to forces within the operational area. As they relate to U.S. ground forces, these latter threats are characterized by the opponent's ability to obstruct the actions of U.S. forces once they have deployed. This report reviews selected findings from a study of Army and joint anti-access and area denial challenges. It also proposes a joint approach to countering these threats in future operations. There are important interdependencies and synergies between the services in terms of their ability to overcome these types of challenges. For example, some threats to the Army's ability to deploy to an operational area must be addressed primarily by the other services. Likewise, the Army could provide considerable assistance to the Air Force and Navy in suppressing or destroying air defenses that challenge joint air operations. For this reason, the services will need to work together to develop operational concepts and systems that will be effective in countering emerging and growing threats in future operations.

The Types of Anti-Access/Area Denial Threats That the U.S. Military Could Encounter in Future Operations Will Vary Considerably

The research described in this report was sponsored by the United States Army and conducted by the RAND Arroyo Center.