Bid protests have been a feature of the U.S. defense acquisition environment for decades. In recent years, the bid protest process has come under increased scrutiny. In response, the National Defense Authorization Act for Fiscal Year 2017 called for a "comprehensive study on the prevalence and impact of bid protests on DoD acquisitions," including the systematic collection and analysis of the characteristics of bid protests and their outcomes. 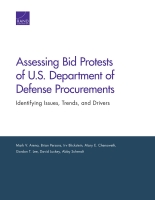 Bid protests have been a feature of the U.S. defense acquisition environment for decades. If an interested party believes that the U.S. Department of Defense (DoD) has made an error in issuing a solicitation for a bid, canceling a contract, or choosing a winning bid, it has the right to file a protest questioning the outcome. A company may file a protest with the contracting DoD agency, the U.S. Government Accountability Office, or the U.S. Court of Federal Claims. In recent years, the process has come under increased scrutiny. For example, it is unclear what level of resources DoD must dedicate to bid protests or to what extent they lead to higher costs or scheduling delays. There has also been concern that the current process may encourage frivolous protests. In response, the National Defense Authorization Act for Fiscal Year 2017 called for a "comprehensive study on the prevalence and impact of bid protests on DoD acquisitions," including the systematic collection and analysis of information on the characteristics of bid protests and their associated contracting outcomes. The resulting study found tension between DoD's need to move forward with procurements and companies' need for information about how a contract award decision was made. However, the overall share of contracts protested was very small, and the outcome of protests depended greatly on the characteristics of the contracts.

Despite a Steady Increase in Bid Protests Filed, Their Numbers Remain Small

Trends in Bid Protest Outcomes Differed Between GAO and COFC

This research was sponsored by the Under Secretary of Defense for Acquisition, Technology, and Logistics, Defense Procurement and Acquisition Policy, and conducted within the Acquisition and Technology Policy Center of the RAND National Defense Research Institute, a federally funded research and development center sponsored by the Office of the Secretary of Defense, the Joint Staff, the Unified Combatant Commands, the Navy, the Marine Corps, the defense agencies, and the Intelligence Community.