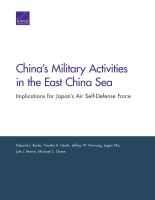 A long-standing rivalry between China and Japan has intensified in recent years, owing in part to growing parity between the two Asian great powers. Although the competition involves many issues and spans political, economic, and security domains, the dispute over the Senkaku Islands remains a focal point. The authors examine how China has stepped up its surface and air activities near Japan, in particular near the Senkaku Islands. They survey the patterns in Chinese vessel and air activity and consider Japan's responses to date. The authors conclude that resource constraints and limited inventories of fighter aircraft pose formidable obstacles to the Japanese Air Self-Defense Force's ability to match Chinese air activity. Given China's quantitative advantage in fighter aircraft, Japan's current approach may not be sustainable. The authors offer recommendations for the United States and Japan to manage emerging challenges.

The research reported here was commissioned by the U.S. Air Force and conducted by the Strategy and Doctrine Program within RAND Project AIR FORCE.