The new era of intensifying global competition is characterized by rivalry in the political, economic, and military spheres. This report summarizes findings of a study about the character of the emerging era of international competition. It is the first of three reports that examines the nature of that competition; evaluates its military, economic, geopolitical, and informational components; and assesses the perspectives of the major powers. 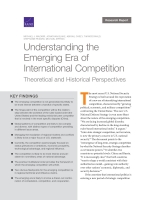 The most recent U.S. National Security Strategy is built around the expectation of a new era of intensifying international competition, characterized by growing political, economic, and military competitions confronting the United States. Yet there is little rigorous analysis of what such an era might look like or how it might unfold. The authors examine the ways in which theory and history can help understand the coming era and offer findings. They define the concept of international competition and provide an initial assessment, based on a first round of survey research grounded primarily in existing analysis, of what this framework suggests about the nature of the emerging era. The report concludes with several tentative findings, offered as hypotheses, about the emerging competition based on this initial survey.

The research reported here was commissioned and sponsored by the Director of Strategy, Concepts and Assessments, Deputy Chief of Staff for Strategic Plans and Requirements and conducted by the Strategy and Doctrine Program within RAND Project AIR FORCE.