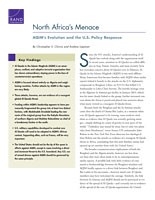 Since the 9/11 attacks, America's understanding of Al Qaeda has evolved along with the organization itself. In recent years attention to Al Qaeda's so called "affiliates" in Iraq, Yemen, Somalia, and most recently Syria has overtaken concern about Al Qaeda's core in Pakistan. The North African terrorist organization Al Qaeda in the Islamic Maghreb (AQIM) is one such affiliate. Many Americans first became familiar with AQIM when media reports linked it loosely to the attacks on the U.S. diplomatic compounds in Benghazi, Libya on 9/11/12 that killed U.S. Ambassador to Libya Chris Stevens. The horrific hostage crisis at an Algerian gas facility in January 2013, which was far more closely linked to the group, further increased concern about the threat it posed and played into anxieties about what many viewed as a resurgent Al Qaeda threat. This assessment of the threat from AQIM is based on an analysis of available open-source documentation. The authors find that although AQIM is a serious regional problem, its similarity to the Al Qaeda of Osama Bin Laden should not be exaggerated, as AQIM does not currently seem bent on global jihad. In most situations, the wisest policy responses to the AQIM threat will focus on supporting local actors and U.S. allies in Europe.

Al Qaeda in the Islamic Maghreb (AQIM) is an amorphous, resilient, and adaptive terrorist organization that has shown extraordinary staying power in the face of counterterrorism operations.

AQIM is focused almost entirely on Algeria and neighboring countries.

Feuding within AQIM's leadership appears to have permanently fragmented the group into at least two distinct factions.