RAND researchers used Twitter advertisements to solicit survey participation from the most-influential members of the pro-Ukraine activist community, influential members of the pro-Russia community, and a general population of Russian-language Twitter users from Ukraine. The goal was to draw on key influencers in the pro-Ukraine activist community to help counter Russian propaganda in the region. 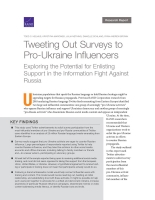 Tweeting Out Surveys to Pro-Ukraine Influencers

Ukrainian populations that speak the Russian language or are of Russian descent might be appealing targets for Russian propaganda. RAND Corporation research from 2018 analyzing Russian-language Twitter feeds emanating from Eastern Europe identified two large and influential communities: one group of seemingly "pro-Ukraine activists" who oppose Russian influence and support Ukrainian democracy and another group of seemingly "pro-Russia activists" who disseminate Russian social media content and oppose an independent Ukraine.

RAND researchers used Twitter advertisements to solicit survey participation from the most-influential members of this pro-Ukraine activist community, influential members of the pro-Russia community, and a general population of Russian-language Twitter users from Ukraine. These advertisements successfully recruited 146 pro-Ukraine activists, 66 pro-Russia activists, and 1,103 general population respondents. The goal of this survey was to identify the extent to which pro-Ukraine activists used Twitter and other social media platforms to counter Russian influence in the region. The survey results demonstrate that a large percentage of pro-Ukraine activists support the United States and European Union and oppose Russia and its influence on Ukraine. Pro-Russia activists support Russia and have mixed views on the European Union and the United States. Large percentages of the pro-Ukraine activists also report using Twitter to help counter Russian influence. They take this activism to other social media accounts and to offline channels, including talking to family members or friends and — to a lesser extent — participating in advocacy groups.