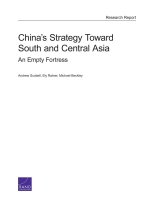 This study analyzes what is driving China's Central Asia and Afghanistan-Pakistan policies, identifies China's overarching strategy, examines the extent of Chinese activities in the region, and assesses their implications for the United States. The authors contend that China's response to the complex challenges on its western borders during the past two decades has been to adopt an "Empty Fortress" strategy, whereby China boldly projects an image of considerable strength in Central and South Asia to mask serious frailty. They conclude that China is not a major threat to U.S. interests in Central Asia, Afghanistan, or Pakistan and is unlikely to pose one in the near future.

China's Relations with Afghanistan and Pakistan

China's Empty Fortress Strategy and Its Implications for the United States