This report presents an independent implementation evaluation of the Re-Engineering Systems of Primary Care Treatment in the Military (RESPECT-Mil) Program, a system of care designed to screen, assess, and treat PTSD and depression among active duty service members in Army primary care settings. Analyses were based on existing program data used to monitor fidelity across clinics, as well as discussions with key stakeholders. 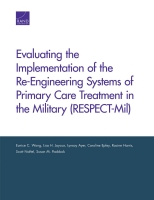 A RAND team conducted an independent implementation evaluation of the Re-Engineering Systems of Primary Care Treatment in the Military (RESPECT-Mil) Program, a system of care designed to screen, assess, and treat posttraumatic stress disorder and depression among active duty service members in the Army's primary care settings. Evaluating the Implementation of the Re-Engineering Systems of Primary Care Treatment in the Military (RESPECT-Mil) presents the results from RAND's assessment of the implementation of RESPECT-Mil in military treatment facilities and makes recommendations to improve the delivery of mental health care in these settings. Analyses were based on existing program data used to monitor fidelity to RESPECT-Mil across the Army's primary care clinics, as well as discussions with key stakeholders. During the time of the evaluation, efforts were under way to implement the Patient Centered Medical Home, and uncertainties remained about the implications for the RESPECT-Mil program. Consideration of this transition was made in designing the evaluation and applying its findings more broadly to the implementation of collaborative care within military primary care settings.

RESPECT-Mil Is Identifying a Considerable Number of Service Members Who Are Reporting Depression and PTSD Symptoms.

Army Installations Sometimes Varied with Respect to the Identification and Referral of Service Members with Mental Health Needs.

Rates of Treatment Response and Remission Seen in RESPECT-Mil Were Within the Range of Other Collaborative Care Studies.

This research was sponsored by the Assistant Secretary of Defense for Health Affairs and the DCoE and conducted within the Forces and Resources Policy Center of the RAND National Defense Research Institute, a federally funded research and development center sponsored by the Office of the Secretary of Defense, the Joint Staff, the Unified Combatant Commands, the Navy, the Marine Corps, the defense agencies, and the defense Intelligence Community.