Assessing mission assurance for combat support when under a cyber attack is challenging because of the sheer number of information systems, the range of vulnerabilities, and the number of combat support functions they support. RAND researchers developed a tool that presents a sequential process for prioritizing those functions and information systems most likely to be problematic for the operational mission during cyber attacks. 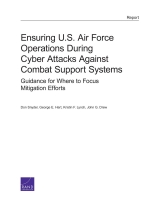 Guidance for Where to Focus Mitigation Efforts

While combat support communities are not responsible for defending cyber networks, they are required to ensure mission execution, including when under cyber attack. Assessing mission assurance for combat support when under a cyber attack is challenging. The fact that many combat support systems do not reside on the most secure networks indicates potential vulnerabilities to cyber attack. Yet the sheer number of information systems that can be attacked, the range of vulnerabilities that these might have, the large number of combat support functions they support, and the complicated connections all of these have to operational missions makes assessments difficult. Add to this the evolving nature of the threats and vulnerabilities in cyberspace, and the task of finding adequate mitigation plans for all possibilities is formidable. RAND researchers developed a tool that presents a sequential process for identifying those functions and information systems most likely to be problematic for the operational mission during cyber attacks.

Making the Data Manageable Is Crucial

A Sequential Process Prioritizes Those Programs Most in Need of Mitigation

The research described in this report was conducted within the Resource Management Program of RAND Project AIR FORCE and was commissioned by the U.S. Air Force Materiel Command.