Evaluates the structure, processes, and outcomes of the Air Force's Deployment Transition Center, which was established in 2010 to provide airmen returning from combat missions an opportunity to decompress and share lessons learned before returning to their home stations. 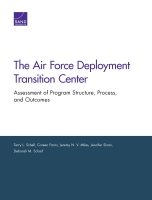 It is often accepted as common knowledge that military personnel benefit from decompression time between a war zone and the home station. To capitalize on the potential benefits of a decompression period paired with support services, the U.S. Air Force established the Deployment Transition Center (DTC) at Ramstein Air Base in Germany in July 2010. The DTC provides airmen returning from combat missions with an opportunity to decompress and share lessons learned before returning to their home stations.

The authors of this report evaluate the structure, processes, and outcomes of the DTC program. They find that, although a majority of participants found the DTC program worthwhile, a comparison of DTC participants and similar airmen who did not participate the program shows no evidence that the program helps reduce posttraumatic stress disorder symptoms, depressive symptoms, binge drinking, or social conflicts with family and coworkers. In addition, one of the DTC program elements appears to be similar to posttraumatic debriefing interventions, which several studies have found to be either ineffective or harmful. For these reasons, if the main goals of the DTC program are to improve behavioral health and social conflict outcomes, the authors recommend that the DTC program be discontinued or redesigned and Air Force resources invested in alternative programs. However, if the DTC program has other goals, such as providing rest and relaxation to airmen after a difficult deployment or capturing after-action information, then the authors recommend that these goals be documented and the DTC program be more specifically tailored to them.

Scientific Literature Supports Some Deployment Transition Center (DTC) Practices, but Others Are Contraindicated

Most DTC Attendees Were Satisfied with the Program

This research was sponsored by the Defense Centers of Excellence for Psychological Health and Traumatic Brain Injury (DCoE) and conducted within the Forces and Resources Policy Center of the RAND National Defense Research Institute, a federally funded research and development center sponsored by the Office of the Secretary of Defense, the Joint Staff, the Unified Combatant Commands, the Navy, the Marine Corps, the defense agencies, and the defense Intelligence Community.