In recent years, concerns have arisen regarding access to behavioral health care for service members and veterans of the U.S. military and their families, particularly for individuals covered by the U.S. Department of Defense Military Health System and the Veterans Health Administration. RAND Researchers examined utilization of behavioral health care among current or former wives of service members and veterans who are covered in those systems. 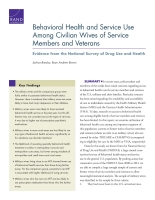 Evidence from the National Survey of Drug Use and Health

In recent years, policymakers and members of the media have raised concerns regarding access to behavioral health care for service members and veterans of the U.S. military and their families. Particular concern has been raised regarding the availability and accessibility of care to individuals covered by the U.S. Department of Defense Military Health System and the Veterans Health Administration. In this report, researchers analyzed the National Study of Drug Use and Health to examine utilization of behavioral health care among current or former wives of service members and veterans who are covered by either TRICARE or CHAMP-VA. Three findings of interest emerged from the analysis. First, relative to the comparison group, military wives were more likely to receive behavioral health services, but this pattern was exclusively due to use of prescription psychiatric medications. No difference was found for specialty behavioral health treatment. Second, residing in rural areas was negatively associated with behavioral health care service use for both groups. Third, contrary to expectations, military wives who live more than 30 minutes from a military treatment facility were more likely than military wives who lived closer to receive prescription psychiatric mediations but not other types of behavioral health services.

Behavioral Health Status of the Two Groups Was Similar

Behavioral Health Services Use Was Similar Between the Two Groups

Place of Residence Played a Minor Role in Use of Services