The assertion that Russia is in violation of its obligations under the Intermediate-Range Nuclear Forces Treaty has raised doubts about its durability. If the treaty cannot be revived, the United States could choose to add conventional land-based theater ballistic missiles to its arsenal. The U.S. Army should start a rigorous assessment of the potential military value and potential strategic risks of deploying such missiles in Asia. 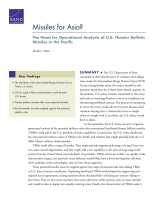 The Need for Operational Analysis of U.S. Theater Ballistic Missiles in the Pacific

The Intermediate-Range Nuclear Forces (INF) Treaty, which the Soviet Union and the United States signed in 1987, prohibits conventional and nuclear-armed land-based ballistic and cruise missiles with ranges between 500 and 5,500 km. The U.S. Department of State concluded in 2014 that Russia is in violation of its treaty obligations, raising doubts about the treaty's durability and how the United States should respond. At the moment, U.S. policy remains committed to the treaty and seeks to encourage Russia to return to compliance by eliminating prohibited systems, but attempts to revive the treaty could take several years and might not succeed. While arguing that it is too soon for the United States to withdraw from the treaty, the author suggests that, in the meantime, the U.S. Army should start a rigorous assessment of the potential military value of conventional land-based theater ballistic missiles (TBMs). No rigorous analysis thus far has measured how land-based TBMs could contribute to solving key operational challenges in relevant scenarios. This report focuses on potential operations in East Asia, showing that TBMs offer both benefits and risks. If a strong, evidence-based case can be made for the military value of TBMs, a strategic assessment could weigh whether the military benefits plausibly exceed the risks to structural stability, crisis management, regional access, and proliferation. By beginning to analyze these questions now, the Army will be prepared to offer well-considered options if current U.S. policy fails to revive the INF Treaty.

But the Benefits Must Be Weighed Against the Potential Risks

This work was sponsored by the Office of the Under Secretary of the Army and was conducted within the Strategy, Doctrine, and Resources Program, a part of the RAND Arroyo Center.