RAND researchers catalog innovative and emerging threats to Army installations, identify deficiencies in the Army's current threat assessment methodologies, and develop a framework to respond to these threats. The analysis revealed that the Army is not prepared to defend continental United States installations from complex coordinated attacks against the homeland using unconventional means. 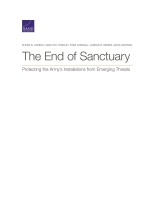 The End of Sanctuary

The United States has entered a new phase of global conflict in which adversaries might seek to delay or disrupt Army installations' ability to power project, mobilize forces, and conduct other wartime missions. As noted in the 2018 National Defense Strategy, "it is now undeniable that the homeland is no longer a sanctuary." Adversary actions might involve complex attacks that are conducted over an extended period of time and targeted at multiple continental United States (CONUS) installations, their surrounding communities, and critical communication nodes. To address this challenge, RAND researchers cataloged innovative and emerging threats to installations, identified deficiencies in the Army's current threat assessment methodologies, and developed a framework to assess potential solutions and the resources required to defend against these threats. The framework was presented to and discussed with a group of experts at an Army installation and at U.S. Army North.In practice, most of the threat and risk-assessment methodologies used by the Army focus on known threats. For example, emphasis is placed on terrorist attacks, active shooters, and cyberattacks. However, it is unlikely that future threats to power projection in a contested environment will mimic previous events. Although the assessments provide valuable information, they are not calibrated to measure how well Army installations would respond to a coordinated attack by a capable adversary employing a combination of effects. Significant changes need to take place to ensure that installations are adequately protected from a capable adversary's ability to disrupt CONUS installations' wartime missions.

Threat assessment methodologies do not include many emerging threats