Using data from the 2014 RAND Military Workplace Study and administrative personnel records of 17,502 U.S. military service members from 2014 to 2016, the authors evaluate the relationship between self-reported symptoms of depression and posttraumatic stress disorder (PTSD) and service member separation rates. The study findings suggest that depression and PTSD symptoms are significantly associated with separation from the military. 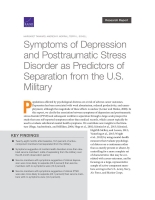 Symptoms of Depression and Posttraumatic Stress Disorder as Predictors of Separation from the U.S. Military

Populations affected by psychological distress are at risk of adverse career outcomes. The authors use data from the 2014 RAND Military Workplace Study and administrative personnel records of 17,502 U.S. military service members from 2014 to 2016 to evaluate the relationship between self-reported symptoms of depression and posttraumatic stress disorder (PTSD) in the U.S. military and subsequent service member separation rates.

The study's findings suggest that depression and PTSD symptoms, including subclinical symptoms, are related to subsequent separation from the military. Addressing mental-health needs could reduce negative employment outcomes that are costly for both the military and individual service members.

This research was sponsored by the Psychological Health Center of Excellence (one of the Centers of Excellence within the Research and Development Directorate of the Defense Health Agency [DHA]) and conducted within the Forces and Resources Policy Center of the RAND National Security Research Division (NSRD).