Effective financial planning for retirement requires information about the spending needs of older households, how those needs evolve with age, and their variation by economic resources. This report finds that spending, adjusted for inflation, declines from age 65 through the retirement years. Spending declines not just among those with low wealth but even among households in the upper fourth of the wealth distribution. 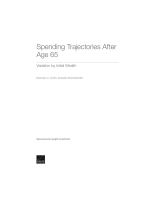 The RAND Corporation has conducted extensive research on spending trajectories of older households. Building on this prior work, the authors provide statistics on household spending and its composition based on longitudinal data from the Health and Retirement Study. They present estimates of the trajectories of spending after age 65 among single and coupled households stratified by wealth holdings observed at or closely following age 65. According to the results, real spending declined for both single and coupled households. The rates of decline varied only modestly across initial wealth quartiles. The fact that spending declines broadly, even among those in the highest wealth quartile, suggests that the decline is not related to economic position. The authors discuss how the estimated trajectories can help with the prediction of households' spending needs at older ages.

This research was sponsored by Insight Investment and conducted in the RAND Center for the Study of Aging, Social and Behavioral Policy Program, within RAND Social and Economic Well-Being.