The Iraqi Army's collapse in summer 2014 has been widely attributed to a lack of will to fight. In this report, Ben Connable applies RAND's analytic model of will to fight to the regular Iraqi Army, identifying factors that contribute to or undermine Iraqi Army will to fight and providing recommendations for the U.S. security force assistance mission in Iraq. 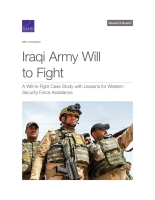 Iraqi Army Will to Fight

In summer 2014, less than three years after the United States withdrew its military forces from Iraq, the Iraqi Army imploded, breaking and scattering in the face of attacks from Islamic State fighters. A consensus emerged that the Iraqi Army collapsed because it had no will to fight. But why did the Iraqi Army lack will to fight? And, going forward, what can U.S. advisors do to help strengthen Iraqi Army will to fight and overall combat effectiveness?

In this report, Ben Connable applies RAND's analytic model of will to fight to the regular Iraqi Army, conducting three historical case studies: the 1980–1988 Iran-Iraq War, the 1991 Gulf War, and the 2004–2011 military advisory period. A main finding is that the Iraqi Army units tend to be brittle: They are capable of fighting effectively, but they are inflexible and break too easily. There is no single-factor explanation for this brittleness. Efforts to change it will need to focus on numerous underlying factors, and Connable provides specific recommendations for the U.S. security force assistance mission in Iraq.

This report also serves an example of how the RAND will-to-fight model, detailed in Will to Fight: Analyzing, Modeling, and Simulating the Will to Fight of Military Units (Connable et al., 2018), can be tailored to specific cases and improved upon.

The Iraqi Army is brittle

Multiple factors contribute to or undermine Iraqi Army will to fight

The research described in this report was sponsored by by the Deputy Chief of Staff, G-3/5/7, U.S. Army and conducted by the Strategy, Doctrine, and Resources Program within the RAND Arroyo Center.