The U.S. strategic focus has increasingly turned to major-power competition, but there is currently no framework for understanding U.S. competition with near-peer rivals China and Russia. This report provides a broad-based understanding of the economic, geopolitical, and military dimensions of these competitions and identifies recommendations for strategic policy action and investment. 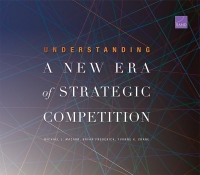 The U.S. strategic focus has increasingly turned to major-power competition, but there is currently no framework for understanding U.S. competition with near-peer rivals China and Russia. Drawing on extensive research on the economic, military, and geopolitical dimensions of U.S. strategic competition with these countries, RAND researchers assembled high-level findings and recommendations to support immediate policy decisions to ensure the U.S. competitive advantage. In the process, they developed a framework for assessing a competition between major powers in four dimensions: (1) overall context for the competition, (2) national power and competitiveness, (3) international position and influence, and (4) shape and standing of bilateral contests. This guide to understanding and succeeding in the new era of strategic competition brings together historical lessons and the latest data on global alliances, economic interdependencies, technological and military advantages, national interests, and more, highlighting broad sets of priorities for U.S. policy and investment.

U.S. success in strategic competition hinges on preserving its economic and technological strength