Although U.S. strategic competition with China and Russia focuses on Asia and Europe, this competition will play out in other regions, including in the Middle East. This report details the political, economic, and military interests and activities of China and Russia in the Middle East; identifies where those efforts contest, intersect, or complement U.S. interests and activities; and provides policy recommendations for the United States. 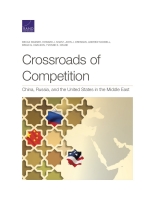 China, Russia, and the United States in the Middle East

Does not include appendix

Although Russia presents short-term challenges, China poses a greater threat to U.S. interests in the Middle East in the long term

China and Russia have approached the region differently, but both have sought to remain on good terms with all Middle Eastern states, regardless of intra-regional disputes

This research was sponsored by the Office of the Secretary of Defense and conducted within the International Security and Defense Policy Center of the RAND National Security Research Division (NSRD).