In support of the Thirteenth Quadrennial Review of Military Compensation, the authors of this report provide input on setting the level of military pay and the annual adjustment to military pay. They conclude that the U.S. Department of Defense should raise the benchmark it uses to set military pay and change the way it calculates the annual increase in military basic pay. 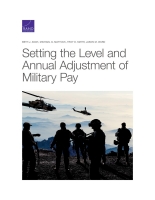 Setting the Level and Annual Adjustment of Military Pay

Every four years, the U.S. Department of Defense (DoD) commissions a review of the military compensation system. Since the 9th such commission reporting in 2002, the benchmark for setting the level of military pay has been at about the 70th percentile of earnings for similar civilians given the unusual demands and arduous nature of military service. The 70th percentile benchmark was based on analysis from the 1990s indicating that pay at around this level had historically been necessary to enable the military to recruit and retain the quality and quantity of personnel required. In addition, by law, the annual increase in military basic pay is guided by changes in the Employment Cost Index (ECI), a measure of the growth in private-sector employment costs; research from the early 1990s suggested that an alternative to the ECI, the Defense Employment Cost Index (DECI), would be more relevant to military personnel.

The authors of this report provide input on the setting of the level of military pay, the relevance of the 70th percentile, and the use of the DECI versus the ECI in setting the annual adjustment to military pay. They find that current military pay may be too high, since recruit quality today exceeds DoD's stated requirements, and, further, quality and retention both exceed the levels observed during the late 1980s and mid-1990s, when the 70th percentile was established. However, the 70th percentile may be too low a benchmark, because there are reasons to believe that the recruiting environment is more difficult than it was in earlier periods. Figures of around the 75th to 80th percentile for enlisted personnel and of around the 75th percentile for officers are likely to meet existing recruit quality objectives.

Assessing the ECI versus the DECI, the authors conclude DoD should consider replacing or supplanting the former with the latter. The DECI has several advantages over the ECI, and most of the critiques of the DECI have been addressed by advances in data availability and computing power in recent decades.

Military pay may be too high, but the 70th percentile benchmark may be too low

The DECI is a promising alternative, or supplement, to the ECI

The research was sponsored by the 13th Quadrennial Review of Military Compensation (QRMC) and conducted within the Forces and Resources Policy Center of the RAND National Security Research Division (NSRD).