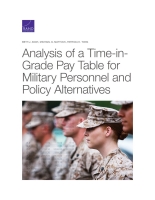 Every four years, the U.S. Department of Defense (DoD) commissions a review of the military compensation system. In support of the Thirteenth Quadrennial Review of Military Compensation, begun in 2018, the authors of this report assess the advantages and drawbacks of using a table based on time in grade, rather than time in service, to set military pay. The primary means by which military personnel are financially rewarded for superior performance is through faster promotion, so a time-in-grade (TIG) pay table may increase performance by providing a permanent reward to those who are promoted faster. The current time-in-service (TIS) pay table provides only temporary financial rewards to those who are promoted faster. A TIG table would also provide higher entry pay to lateral entrants who enter the military at higher ranks but with no prior military experience.

Drawing on the work of past studies and using more recent data and modeling capabilities, the authors (1) simulate how basic pay would change under a TIG table over the course of a career for a variety of groups of service members, (2) simulate the retention, cost, and performance effects of the TIG table, (3) estimate the costs to service members and to DoD of transitioning to a TIG table, and (4) assess whether the benefits of a TIG table could be achieved by using alternative policies under the current TIS table.

The authors' analysis shows that better performers would be more likely to be promoted and retained under a TIG table, and that a TIG table could achieve about the same retention as the TIS table, at less cost per member and with improved performance. The principal disadvantage is that transitioning to a TIG table would be costly to DoD and disruptive to a significant fraction of the force: Almost one-third of the active force would experience a reduction in basic pay, and if DoD were to adopt "save pay" to hold members harmless, it would cost $1.39 billion, in 2018 dollars, in the first year. Expanding the services' ability to grant constructive credit — whereby services members who are promoted faster are credited with extra years of service for the purpose of the TIS table — could achieve some, but not all, of the advantages of a TIG table.

A TIG table has some disadvantages

The TIS table cannot fully achieve the advantages of a TIG table, but with some policy changes it could come close

The research was sponsored by the 13th Quadrennial Review of Military Compensation (QRMC) and conducted within the Forces and Resources Policy Center of the RAND National Security Research Division (NSRD).