In this first-ever regional assessment of firm-level governance networks in East and Southeast Asia, the author describes the structure of these interfirm networks and documents their dramatic growth and integration between 2006 and 2020. In addition to offering a descriptive account of the structure of these networks, the analysis describes suggestive structural factors that offer insight into the future of regional integration. 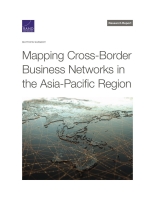 Over the past 20 years, the economies of East and Southeast Asia have more than doubled in size. As they've grown, the activities of Asian firms have become increasingly interdependent and have integrated with ever-more global supply chains and markets. This integration has led to the formation of enduring partnerships that provide an underlying structure for the regional economy. Rather than operating as atomized firms that interact through arms-length contracts on the open market, firms create enduring partnerships and persistent rivalries that shape the patterns of economic activity both within and between national economies in the Asia-Pacific region.

The author of this report examines these interfirm relationships and maps the business networks that extend throughout the region by focusing on board-of-director interlocks within nations' borders and across them. Tracing the dramatic growth of these interlocks between 2006 and 2020, he provides a first-ever regional assessment of firm-level governance networks in East and Southeast Asia.

Funding for this study was provided by the generous contributions of the RAND Center for Asia Pacific Policy (CAPP) Advisory Board. This research was conducted within CAPP, which is part of International Programs at the RAND Corporation.