This final report in a series is part of a regular effort to monitor the wage losses of injured workers in the California workers' compensation system between 2013 and 2017. It updates estimates of trends in earnings losses reported in the interim reports and provides the first estimates of wage replacement rates for workers affected by benefit changes that were adopted as part of major workers' compensation reform legislation in 2012. 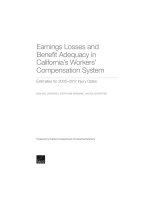 Workers' compensation systems are designed to provide medical care and indemnity (or wage loss) benefits and to protect workers against medical expenses and income loss that result from workplace injury. Although most workers' compensation claims are for minor injuries that require only medical care, many workplace injuries result in temporary or permanent work disability and earnings losses that can be substantial. Patterns of earnings loss can identify which workers need more attention from policymakers. Earnings loss data are also needed to evaluate benefit adequacy or return-to-work interventions. But post-injury labor market outcomes are not regularly reported in the state of California, impeding monitoring, research, and evaluation.

This final report in a series is part of a regular effort to monitor the wage losses of injured workers in the California workers' compensation system between 2013 and 2017. It updates estimates of trends in earnings losses reported in this project's three interim reports and includes analysis of the factors that have driven changes in workers' labor market outcomes from 2005 to 2017. It also provides an investigation of the reasons for regional differences (between Southern California and the rest of the state) in labor market outcomes for workers with cumulative trauma injuries. The report also provides estimates of after-tax wage replacement rates for workers with permanent disability and the first estimates of wage replacement rates in California for workers affected by statutory increases in permanent disability benefits that were adopted as part of major workers' compensation reform legislation enacted in 2012.

Earnings Are Recovering After Dropping During the Great Recession, But Slowly

Several Factors Drove Trends in Earnings Losses Between 2005 and 2017

This research was sponsored by the California Department of Industrial Relations and conducted by the RAND Institute for Civil Justice, part of the Justice Policy Program within RAND Social and Economic Well-Being.