The authors of this report present new estimates of wage loss for California's injured workers in 2016–2017 and compare these estimates with trends before, during, and after the Great Recession. They also analyze trends for key subgroups of interest in the workers' compensation system, including analyses by receipt of indemnity benefits, industry, type of injury, and geographic region. 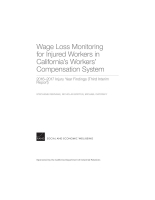 The authors find that overall wage losses have remained relatively constant through 2017 but are beginning to increase for workers most affected by workplace injury: workers with indemnity payments, cumulative trauma, and permanent disability. Still, the overall gains are modest, and relative earnings remain lower than they were in the years prior to the Great Recession, suggesting that injured workers have not yet experienced the full benefits of the economic expansion.

There may be signs of improvement for workers with permanent disability

The research described in this report was prepared for the State of California Department of Industrial Relations and conducted by the RAND Institute for Civil Justice (ICJ), part of the Justice Policy Program within RAND Social and Economic Well-Being.