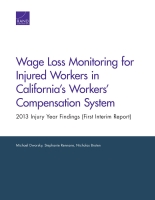 This report presents new estimates of wage loss for workers in California who suffered a workplace injury or illness in 2013 and compares these estimates with trends before, during, and after the Great Recession. The authors matched injured workers with control workers in the same firm at the time of injury with similar characteristics and analyzed the impact of injury on labor market outcomes, including earnings and employment.

Labor market improvements were concentrated among workers with medical-only and temporary disability claims.

Relative earnings varied by industry and nature of injury.

The research described in this report was prepared for the State of California Department of Industrial Relations and conducted by the RAND Institute for Civil Justice (ICJ), part of the Justice Policy Program within RAND Justice, Infrastructure, and Environment (JIE).