If Teenagers Get More Sleep, California Could Gain Billions 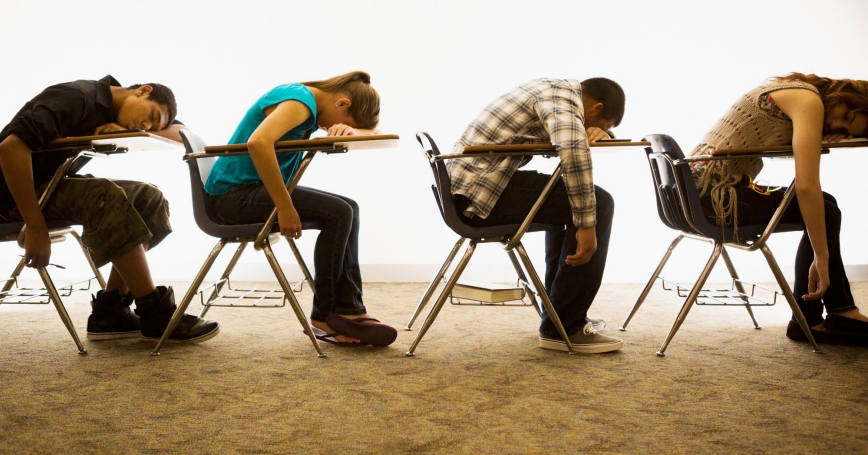 Sleep deprivation among teenagers should be regarded as a public health epidemic. Only about 40 percent of teenagers get the eight to 10 hours of sleep a night recommended by sleep scientists and pediatricians.

A major reason teens aren't getting enough sleep isn't hormones, their busy social lives, too much homework or too much screen time. It's actually a matter of public policy.

That public policy is school start times — an issue that is being debated around the country, and particularly in California, where the Senate has passed and the Assembly is about to vote on a bill that would require middle and high schools across the state to start no earlier than 8:30 a.m. That would be consistent with recommendations from the American Academy of Pediatrics and other major medical organizations.

For California, it's a small change, really. According to the Centers for Disease Control and Prevention, the average start time for middle and high schools in the state is 8:07 a.m. So the proposed law would, on average, delay the beginning of the school day by 23 minutes. However, this small change could have big implications.

Later start times are linked with reductions in tardiness and absences, improvements in graduation rates and teen well-being, and reductions in car crashes.

Proponents of the bill and other school-start-time initiatives across the country cite several scientific studies showing that later start times are linked with reductions in tardiness and absences, improvements in graduation rates and overall teen well-being, and reductions in motor vehicle crashes, the No. 1 cause of death among teenagers.

At the same time, the potential move in California to later school start times has also received strong opposition, primarily from the California School Boards Assn., which represents thousands of school board members in the state. The group has described the measure as “too rigid for a population so large and diverse.”

In addition, many people instinctively question whether changing school start times will actually result in more sleep for teens. They ask: If schools start later, won't teens just stay up later? The science says no. A systematic look at the evidence on the effect of later start times suggests that when schools start later, teens get more sleep. Basically, they go to sleep at the same time but wake up later, and they benefit from better quality sleep that tends to come their way in the early morning hours.

Another concern has to do with the cost implications of delaying school start times — an ever-present issue in the age of increasingly tight school budgets. The move could lead to a range of initial up-front costs, with budget-watchers worried most about costs associated with changing bus schedules and additional lighting for athletic fields because after-school activities would be pushed later in the day.

However, our recently released RAND research found delaying school start times to 8:30 a.m. could actually result in significant economic statewide benefits that would be realized within a matter of years.

Over the span of about a decade, the United States could stand to make financial gains of around $83 billion if teenagers were able to get more sleep. In California alone the financial gains would be just over $10 billion. Within even two years, most states would break even in terms of the initial costs of the move versus the economic benefits.

These gains are based on a macroeconomic model that uses data looking at two key effects of better-rested teens: improved academic performance and reduced motor vehicle crashes.

An hour more a night of sleep increases the probability of high school and college graduation 8 percent to 13 percent.

In terms of academic performance, research published (PDF) with the apt title “Sleepwalking Through School” shows that an hour more a night of sleep increases the probability of high school and college graduation 8 percent to 13 percent. Better grades have a positive effect on the jobs teenagers will obtain in the future — and how much individuals contribute to the economy via future earnings.

More sleep could also lead to fewer vehicle crashes. CDC data show that in 2015, more than 2,300 teens in the United States from age 16 to 19 died in motor vehicle accidents. About 20 percent of all crash fatalities involve a driver impaired by sleepiness, drowsiness or fatigue, according to the AAA Foundation for Traffic Safety Standards. This feeds into the economic fallout caused by inadequate teen sleep: The tragedy of early death in an accident removes them from the future labor supply equation, as well as emotionally affecting those forced to cope with the loss of a young life.

Later start times present school districts with logistical challenges, but they are surmountable, and the scientific and economic evidence shows it is worth the effort.

Wendy M. Troxel is a senior behavioral and social scientist at the nonprofit, nonpartisan RAND Corp. Marco Hafner is a senior economist at RAND Europe. They were the lead authors of the recent released study “Later School Start Times in the U.S.: An Economic Analysis.”

This commentary originally appeared on Los Angeles Times on September 7, 2017. Commentary gives RAND researchers a platform to convey insights based on their professional expertise and often on their peer-reviewed research and analysis.