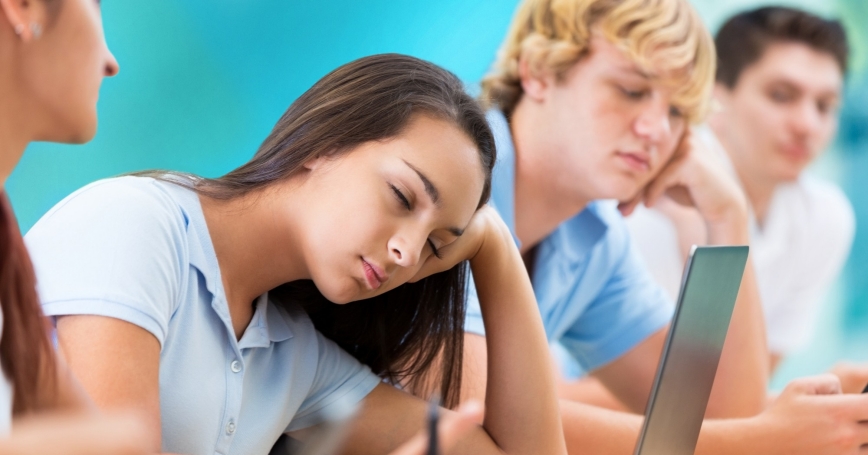 School start times are becoming a hotly debated topic in school districts and states across the U.S. For instance in California, the final vote is expected shortly on a new state bill that would require the start times of middle and high schools to be extended to 8:30 a.m., and other states across the country are discussing similar bills.

Opponents to later school start times cite concerns about the costs of rescheduling bus routes and practical challenges faced by parents in rescheduling their work schedules, as well as the impact on after-school sports and extra-curricular activities.

When considering the proposal, it's important to first look at the science. The American Academy of Pediatrics and other major medical organizations recommend that middle and high schools start no earlier than 8:30 a.m., to accommodate the known biological shift in adolescent sleep patterns that leads to later bedtimes and later wake-times.

Waking a teenager at 6 a.m. is the biological equivalent of waking an adult up at 4 a.m.

Due to these biological changes, waking a teenager at 6 a.m. is the biological equivalent of waking an adult up at 4 a.m., a wake-up time that many adults would struggle with, even if it was part of their job.

Our own study for the RAND Corporation shows that later school start times nationally could also lead to significant financial gains for the U.S. economy—around $140 billion in the space of 15 years. This corresponds to an annual gain of about $9.3 billion each year, roughly the equivalent to the annual revenue of Major League Baseball.

While it is anticipated that there may be costs associated with delaying school start times, a key concern expressed by those opposed to the move, the shift could ultimately result in significant economic gains within a couple of years. The full cost will vary by district and state, but a previous estimate suggests that adjusting bussing strategies could cost around $150 per student. Using this estimate, our research suggests that the benefits would outweigh the costs per student of delaying school start times to 8:30 am after a relatively short period of time (2 to 3 years). Even if the costs per student are set higher, the benefits would likely outweigh the cost after a reasonable time.

These economic gains would be realized through the higher academic and professional performance of students, and reduced car crash rates resulting from fewer drowsy teenagers behind the wheel.

An hour more of sleep each night could increase the probability of high school graduation by more than 13 percent.

An hour more of sleep each night is estimated (PDF) to increase the probability of high school graduation by more than 13 percent and the probability of attending college by almost 10 percent. Better grades have a positive effect on the jobs teenagers obtain in the future and, in turn, how much those workers contribute to the economy through future financial earnings.

About 20 percent of all car crash fatalities involve a driver impaired by sleepiness, drowsiness or fatigue. This feeds into the economic fallout caused by inadequate teen sleep, as the loss of young life impacts the future supply of labor in the U.S. economy.

It is important to realize that in terms of time, what's being proposed in California is a relatively small change. The average start time for California schools is 8:07 a.m., so essentially the bill would, on average, delay the start of middle and high schools by 23 minutes.

Our research findings demonstrated that a small timing change could make a big difference. The evidence showed that starting middle and high school at 8.30 a.m. would not only help the health of teenagers, but is also economically sound.

Marco Hafner is a senior economist at RAND Europe. Wendy M. Troxel is a senior behavioral and social scientist at the nonprofit, nonpartisan RAND Corporation. Both were lead authors of the study “Later school start times in the U.S.: An economic analysis,” released Aug. 30.

This commentary originally appeared on Thrive Global on September 11, 2017. Commentary gives RAND researchers a platform to convey insights based on their professional expertise and often on their peer-reviewed research and analysis.