Misconceptions About 'Medicare for All' 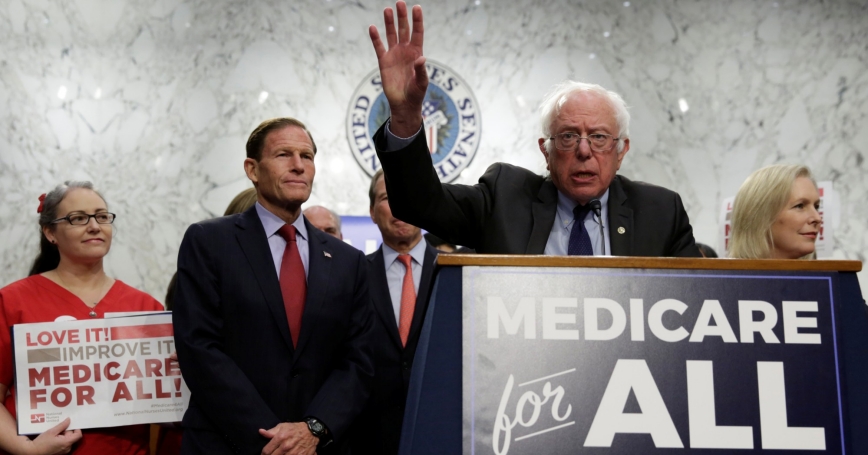 Senator Bernie Sanders speaks during an event to introduce the Medicare for All Act of 2017 on Capitol Hill in Washington, September 13, 2017

“Medicare for All” is now a political campaign talking point. Polls on Medicare for All and single-payer health care have shown that public support varies depending on what the proposal is called and the arguments for or against it. Misconceptions abound about these proposals and their likely effects.

Health care would be free.

Care would not be free in a single-payer system—it would be paid for differently. Instead of paying insurance premiums, people would pay taxes, which would be collected by a government agency and used to pay for health care on behalf of the population. Some in higher tax brackets might pay more under a single-payer system than under the current system, while others might pay less.

Many single-payer proposals, including Sen. Bernie Sanders' “Medicare for All” proposal, cover a comprehensive range of services with no or very low co-pays and deductibles. While common in many proposals (PDF), a single-payer system would not necessarily eliminate all out-of-pocket expenses. In fact, the current Medicare program, which some consider a form of single payer, has deductibles and co-pays.

Two recent studies estimated that in a single-payer system, total spending could decline by a few percentage points.

Two recent studies, a national-level analysis by the Mercatus Center and RAND's analysis of a single-payer proposal for New York state, estimated that total spending could decline by a few percentage points. Regardless of whether total spending goes up or down, federal spending would almost surely increase, because the government would be responsible for paying the bills.

People with employer insurance would have fewer benefits covered.

If the United States adopted a single-payer plan, employer-sponsored insurance would become less relevant because people would have an alternative source of coverage. As a result, many employers would drop health insurance coverage (PDF).

However, workers would not lose access to insurance—they would have coverage through the single-payer plan. Many single-payer plans, including Sanders' “Medicare for All” proposal, cover more than most current employer insurance plans, which have an average deductible of $1,573 for single coverage.

Some single-payer proposals explicitly prohibit employers and private insurers from offering health insurance coverage, to avoid a two-tiered system in which wealthier people have access to more services and providers. Other proposals would allow private insurance to offer coverage for services not included in the single-payer plan (such as elective surgeries), or to provide faster or improved services for those who wish to supplement their benefits.

For example, in Australia, all residents are eligible for basic health services provided through a single payer, but those with higher income are encouraged to buy additional, private coverage that provides access to private providers and hospitals.

None of the leading Medicare for All proposals require that doctors and other health care professionals become government employees, as is the case in the United Kingdom's National Health Service. Under Sanders' Medicare for All proposal, private practices and hospitals would continue to operate independently. Other single-payer proposals require hospitals to convert to nonprofit status (PDF), but could remain privately run.

Enrollees generally would be able to choose among providers participating in the program, and—if all providers participated—there would be no need to worry about out-of-network charges. However, changes in payment rates under a single-payer system could affect doctors' willingness to supply services, and could make it more difficult to get appointments.

Jodi L. Liu is an associate policy researcher at the nonprofit, nonpartisan RAND Corporation. Christine Eibner is the Paul O'Neill-Alcoa chair in policy analysis at RAND and a professor at the Pardee RAND Graduate School.

This commentary originally appeared on USA Today on October 26, 2018. Commentary gives RAND researchers a platform to convey insights based on their professional expertise and often on their peer-reviewed research and analysis.