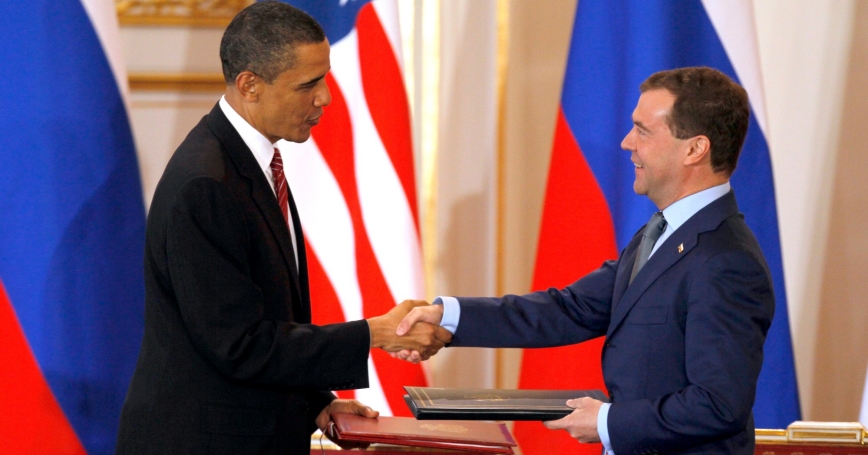 by William Courtney and Bruce McClintock

For many, the Cold War ended with the fall of the Berlin Wall in 1989 or the collapse of the Soviet Union two years later. Yet Russia and the US are still locked in a nuclear cold war. Thousands of nuclear weapons are deployed, some on high alert. Although the US prudently withdrew from several past arms control treaties with Russia, it could be in America's interest to extend New START.

Russia and the US both give priority to maintaining stable deterrence. This concept encompasses punishment (instilling fear of consequences) and denial (causing an adversary to worry it could not achieve desired results). Just last year, then-Chairman of the Joint Chiefs of Staff, Joseph Dunford, told Congress that deterrence “is our singular, most important mission.” In Russia's case, President Putin has made various public statements (PDF) about the role of nuclear weapons for deterrence.

The US has also consistently claimed that reliable and effective nuclear weapons promote the policy of deterrence. For multiple administrations, the US has also stated that systems must be modernized to maintain reliability and capacity to penetrate sophisticated defenses, and be credible at all levels of deterrence.

Both the US and Russia are already replacing and modernizing nuclear arsenals. Russia says 90 percent of its long-range, or strategic, nuclear forces will be modernized by 2020. The US has similarly announced several plans for modernization, such as stealthier bombers and air-launched cruise missiles, new sea-launched cruise missiles, and newer submarine-launched ballistic missiles, some with lower-yield weapons. Congress backed these systems in the FY20 National Defense Authorization Act.

Arms control accords can be valuable, especially when nuclear arsenals are being modernized. They help balance overall relations between adversaries and promote a stable nuclear balance. In the US, internationally-agreed limitations on nuclear forces help sustain bipartisan support for modernizing them. President Reagan, in seeking backing for the controversial MX (Peacekeeper) land-based missile and other new systems, proposed negotiating with the USSR to achieve 50 percent cuts in strategic nuclear forces. To obtain Senate consent to the 2010 New START Treaty, which further cut the size of deployed nuclear arsenals, President Obama also promised modernization.

And the US has shown a willingness to leave treaties when they have outlived their usefulness. In 2002, the US withdrew from the Anti-Ballistic Missile (ABM) Treaty when its limits, aimed at nuclear-armed missile defenses, began to constrain testing of non-nuclear variants. In 2019, after years of Russian noncompliance with the Intermediate-range Nuclear Forces (INF) Treaty, the US exercised its right to withdraw. It, too, was meant to constrain nuclear missiles.

For a decade, New START has reduced nuclear risks and improved strategic stability. These gains could persist if the treaty is extended.

In both cases, technological advances, such as precision guidance and lighter materials, enabled non-nuclear systems to perform many missions once performed only by nuclear arms. Largely for this reason, non-nuclear systems drew more support, and complaints about the demise of the ABM and INF Treaties were muted.

Treaties constraining strategic offensive forces, such as New START, remain vital. Presidents Reagan and George H.W. Bush negotiated the START Treaty, the first ever to reduce such forces. It entered into force in 1994. President Obama negotiated the current New START Treaty, which further slashed forces. It entered into force in 2011 and, unless extended, will expire in February 2021. The US verifies Russian compliance through intrusive onsite and other monitoring, and thus far Russia has complied with its provisions.

Presidents Trump and Putin could both benefit by extending New START for another five years. US military leaders have backed New START and affirmed that “bilateral, verifiable arms control agreements are essential to our ability to provide an effective deterrent.” Putin knows that Russia's economy could not easily afford an all-out competition to build up nuclear arms.

It's true, modernization costs money: in 2017 the Congressional Budget Office estimated that modernizing and maintaining the US nuclear arsenal would cost $1.2 trillion over 30 years.

The Russian leader has proposed extending New START. He seems eager to do so even though he might prefer adjustments, such as to take account of some new technologies. Trump has conversely signaled a possible willingness to allow New START to expire next year. Yet, there is bipartisan and military support for extending it for another five years. Under the treaty, the US president can do this without having to seek new Senate advice and consent.

New START could do more than help stabilize relations with Russia and reduce overall nuclear risks. It could also simultaneously allow the US to deploy new and more effective nuclear systems that form the basis of our deterrence strategy while ensuring that several of Russia's new strategic weapons, now being advanced in aggressive modernization programs, would be constrained.

For a decade, New START has reduced nuclear risks and improved strategic stability. These gains could persist if the treaty is extended. Meanwhile, the US and Russia would have more time to explore future arms control options, including to account for emerging technologies such as maneuverable hypersonic arms, and China's nuclear forces.

In the past, exiting the ABM and INF Treaties made sense for America. Today, extending New START could make the US and its allies more secure.

William Courtney is an adjunct senior fellow at the nonprofit, nonpartisan RAND Corporation. He was US ambassador to Kazakhstan, Georgia and the US-Soviet Commission to implement the Threshold Test Ban Treaty, and deputy US negotiator for defense and space (missile defense) in the US-Soviet Nuclear and Space Talks in Geneva.

Bruce McClintock is a defense and policy researcher at RAND. He was the US Defense Attaché to Russia, 2014–2016.

This commentary originally appeared on Inkstick on February 10, 2020. Commentary gives RAND researchers a platform to convey insights based on their professional expertise and often on their peer-reviewed research and analysis.