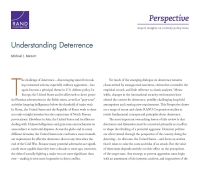 The challenge of deterrence — discouraging states from taking unwanted actions, especially military aggression — has again become a principal theme in U.S. defense policy. Because many potential adversaries are significantly more capable than they were a decade or more ago, moreover, the risks of actually fighting a major war are more significant than ever — making it even more imperative to deter conflict. Yet much of the emerging dialogue on deterrence remains characterized by unsupported assertions, claims that contradict the empirical record, and little reference to classic analyses. Meanwhile, changes in the international security environment have altered the context for deterrence, possibly challenging long-held assumptions and creating new requirements. This Perspective draws on a range of recent and classic RAND Corporation studies to revisit fundamental concepts and principles about deterrence. The most important overarching lesson of this review is that deterrence and dissuasion must be conceived primarily as an effort to shape the thinking of a potential aggressor. Any strategy to prevent aggression must begin with an assessment of the interests, motives, and imperatives of the potential aggressor, including its theory of deterrence (taking into account what it values and why). Deterrence turns out to be about much more than merely threatening a potential adversary: It demands the nuanced shaping of perceptions so that an adversary sees the alternatives to aggression as more attractive than war.