As COVID-19 Makes Clear, U.S. Allies in the Indo-Pacific, Not the Money They Pay to Host U.S. Forces, Are the Value Proposition 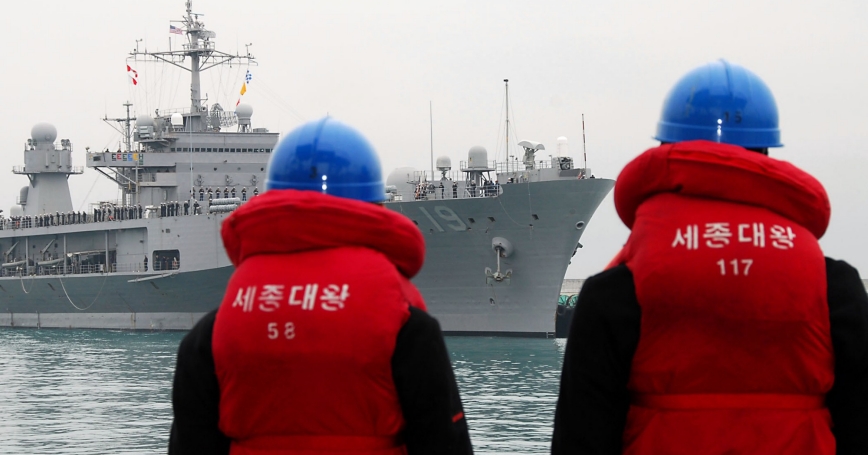 Why does the United States maintain a network of alliances in Asia? Recent authoritative U.S. policy documents including the 2017 National Security Strategy (PDF), the Department of Defense's Indo-Pacific Strategy Report (PDF), and the Department of State's A Free and Open Indo-Pacific: Advancing a Shared Vision (PDF), as well as the Congress's 2018 Asia Reassurance Initiative Act, describe Japan and South Korea as America's asymmetric advantages in maintaining regional peace and stability. Skeptics would argue these key American partners are merely free riders on America's good will, worth defending only to the extent that the United States can squeeze money out of them to offset the costs of such protection. If allies are indeed valued partners in sustaining an order that has supported U.S. global interests and influence for over 70 years—as America's communist adversaries in Beijing and Pyongyang clearly believe—then what expectations should the United States have of its allies in terms of their defense spending and contributions to hosting U.S. forces?

Such questions are critical to answer, particularly in a world grappling with COVID-19. For the past several months, the United States has been negotiating a Special Measures Agreement (SMA) with South Korea, a document that governs how much that country will contribute to the costs of hosting U.S. forces. Washington has had such agreements with Seoul since 1991; the latest one expired at the end of 2019 over disagreements on how much South Korea should contribute going forward. Another such agreement exists with Japan, governing that country's host nation support for U.S. forces; negotiations over an updated SMA with Japan will be starting later this year. Yet the outbreak of COVID-19 has affected the environment in which such talks take place. It is clear that the disease has the potential to reshape the global balance of power for the post-pandemic world, and the way the United States handles the SMA talks with its allies will play a major part in defining the future of Indo-Pacific security and the role that the United States will play in it. Success in these talks, therefore, is critical.

Unfortunately, the talks with South Korea have gone poorly thus far. Trump initially wanted Seoul to increase its contributions to about $5 billion per year, a more than 500 percent increase from the $924 million it paid last year. Despite Seoul offering to increase its contributions to $1.3 billion, President Donald Trump rejected that offer in early April as too low. This does not bode well for the alliance. According to one poll in December 2019, just 4 percent of South Koreans supported their government meeting Trump's demands. With no agreement in place, on April 1, local Korean employees who support U.S. facilities in South Korea were furloughed for the first time in the alliance's history, a development that would have rippled through the Korean economy with negative consequences for Koreans' views of their American ally had Seoul not stepped in to provide for these temporarily laid-off workers. And although the talks with Japan have yet to begin, one early report suggested the United States might be seeking a five-fold increase over its current five-year, $8.7 billion SMA. Should this turn out to be true, this too is likely to create friction in alliance relations.

These demands have sent shock waves through Seoul and Tokyo. Not helping matters is the fact that confidence in Trump is low in both countries, with just 46 percent of Koreans and 36 percent of Japanese reporting trust in the American president. Based on past discouraging statements by the president about South Korea and Japan, there are real fears in both countries that, should negotiations fail, the Trump administration might move to withdraw U.S. forces in part or in toto, leaving the allies to confront the threats of China and North Korea on their own. While Trump has denied any intention to withdraw troops, rumors to that effect continue to surface, forcing USINDOPACOM Commander Admiral Philip Davidson to reiterate in November 2019 that he has “no plans to draw down troops” from South Korea. Even if no troops are pulled out of South Korea or Japan, there are real consequences to failed negotiations or talks that drag on or conclude with great acrimony. China and North Korea (PDF), after all, have long sought to create or take advantage of any seams or schisms in the policy positions between the United States and its allies through gray zone coercion, influence operations and hostile social manipulation, or political warfare, hoping to weaken and ultimately to break the U.S.-centered alliance network in the Indo-Pacific.

Even if no troops are pulled out of South Korea or Japan, there are real consequences to failed negotiations or talks that drag on or conclude with great acrimony.

Any discussion of allied contributions must start with an assessment of the relevant trends in defense budgets and spending by the two countries. Japan spends about $50 billion per year on defense, and has grown its defense spending consistently for the past eight years. It is home to strategic U.S. forces that themselves are responsible not just for Japan's defense, but for regional security and defense of U.S. interests. Japanese companies also provide critical maintenance support to U.S. forces, saving them the trouble of having to return to the United States. In addition to these contributions, Tokyo pays for the construction of facilities in Japan, such as the Futenma Replacement Facility in Okinawa, and for relocation costs and construction of new facilities elsewhere, such as the roughly $3 billion cost of relocating 4,000 U.S. Marines to Guam. Meanwhile, Japan has accelerated development of its amphibious forces and is developing capabilities in the new domains of cyberspace, outer space, and the electromagnetic spectrum. Tokyo is also moving to beef up its defense capabilities (PDF) through the purchase of, or expressed intent to procure, critical assets including stand-off missiles, two Aegis Ashore ballistic missile defense batteries, E-2D Hawkeye early warning and command and control aircraft, three Global Hawk long-endurance surveillance UAVs, five V-22 tilt-rotor aircraft, and 147 F-35s.

For its part, South Korea spends 2.2 percent of its GDP on defense, totaling roughly $44 billion in 2020. In addition, Seoul paid for 90 percent of the $10 billion construction costs of Camp Humphreys, the new consolidated base for U.S. Forces Korea that is the largest overseas U.S. military installation in the world. Like Japan, South Korea is also procuring advanced U.S.-sourced systems, including four Global Hawks and 65 F-35s. However, in the wake of the COVID-19 outbreak, South Korea has trimmed its planned defense expenditures by approximately $738 million, or nearly 1.5 percent.

But it is important to note that, apart from defense spending, arms purchases, and contributions to host-nation support, Japan and South Korea are enormous contributors to U.S. power, influence, and well-being. For example, Japan and the United States together promote the Free and Open Indo-Pacific strategy, helping regional states focus on sustainability in their development and support regional openness, fairness, and transparency. Likewise, Japan and the United States, together with India and Australia, form the Quadrilateral Security Dialogue, focused on a shared commitment to preserving and promoting the rules-based order in the region. South Korea also stands shoulder-to-shoulder with the United States, with its forces having fought alongside the United States in Vietnam and Iraq, and having spent decades training together in case hostilities with North Korea should resume. Additionally, South Korea has shipped the United States critical medical supplies that include 750,000 COVID-19 testing kits and 10,000 masks and bottles of hand sanitizer to Native American veterans of the Korean War, proving that a friend in need is a friend indeed.

In a COVID-19 environment, it makes little sense for Washington to squeeze Seoul or Tokyo for marginal defense dollars—such a step would be pennywise but pound foolish, and even if the highest dollar amounts sought were actually achieved, the additional funds gained would total only about a percent and a half of the U.S. defense budget. This is not to say that these allies should not pay more; they should. As allies facing mutual shared adversaries with growing capabilities and an appetite for greater provocations, we share a responsibility to meet those challenges with new resolve and greater lines of effort. But the timing of any U.S. push to encourage these allies to do more needs to be reconsidered.

These are not normal times. To proceed with SMA negotiations as if they are normal circumstances risks damage to long-term U.S. interests. What could help is a short-term solution, a stop-gap measure such as an agreement on South Korea's recent offer of $1.3 billion per year in host-nation support, with a plan to revisit the issue again once the COVID-19 threat has passed. A similar short-term deal could be reached for Japan.

U.S. alliances with Japan and South Korea are the foundations—“the cornerstone and the linchpin” as one recent report put it—of U.S. power and influence in the Indo-Pacific region. But COVID-19 has complicated any effort to hammer out new sustainable SMA deals. While SMA negotiations are critical to the long-term health of the alliances, pushing forward with them when Japan and South Korea—like the United States—appear to be on the precipice of deep recessions amid an ongoing pandemic will not serve long-term U.S. interests. Doing so could result in political ill-will, reduced public support, and weakened alliances, all of which benefit U.S. adversaries.

These allies are decades-long investments built on shared values and interests, as well as grassroots ties between people. Compromise could be possible, especially if it results in stronger alliances against a backdrop of growing challenges and common threats. At the end of the day, the great value the United States extracts from its alliances with Japan and South Korea is not the money they provide to offset the costs of hosting U.S. forces; the value is the deep and abiding alliances themselves and the liberal, democratic, rule of law market economies and societies to which they link the United States.

This commentary originally appeared on The Dlplomat on June 12, 2020. Commentary gives RAND researchers a platform to convey insights based on their professional expertise and often on their peer-reviewed research and analysis.