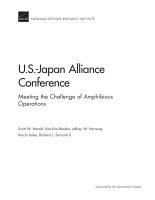 Meeting the Challenge of Amphibious Operations

In late March 2018, the Japanese Ministry of Defense announced a major reorganization of the Japan Ground Self-Defense Force that included the establishment of an Amphibious Rapid Deployment Brigade (ARDB). In anticipation of the establishment of the ARDB, the RAND Corporation convened a conference at its Santa Monica, California, headquarters on March 6, 2018, to examine the establishment of Japan's amphibious operations force from a variety of perspectives. The scholars and practitioners who contributed to this event were asked to evaluate the reasons for the ARDB's establishment, its deterrence value and defense capabilities, its relevance for humanitarian assistance and disaster relief missions, the extent to which it contributes to jointness within the Japan Self-Defense Forces, its relationship with and value to the U.S. Marine Corps, and ideas for the future evolution of Japan's amphibious operations capabilities. The papers on which these presenters based their remarks at that conference are captured in this conference proceedings.

This work was sponsored by the Government of Japan and conducted within the International Security and Defense Policy Center of the RAND National Security Research Division (NSRD).