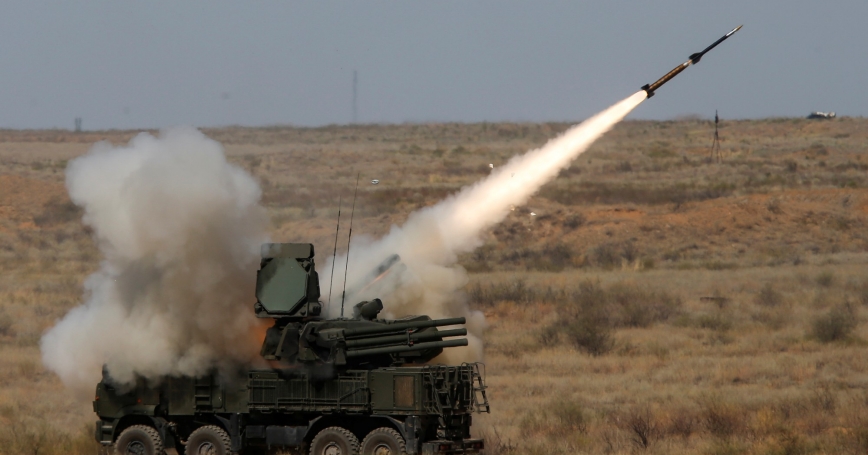 by John V. Parachini and Peter A. Wilson

While most countries struggle with the COVID-19 pandemic, the civil wars in Syria and Libya have become battlegrounds for foreign states backing different local sides. External powers have intervened in both civil wars supplying advanced conventional weapons that have intensified the conflicts, but not all the weapons have performed as claimed. Perhaps the most startling example of this is how ineffective modern Russian air defense systems have been at countering drones and low-flying missiles. In the face-off between expensive air defensive systems and lower cost offensive drones and low-flying missiles, the offense is winning.

In recent weeks, drones supplied by Turkey (PDF) in support of the internationally recognized Government of National Accord have reportedly destroyed the Russian Pantsir short-range air defense systems (SHORADS) that the opposition Libyan National Army (LNA) used to protect their forces. The inability of the LNA to protect their forces has turned the tide of the conflict and is a reminder of how difficult effective air defense is in an era of comparatively inexpensive armed drones and precision guided low-flying cruise missiles.

The LNA is not alone in having difficulty employing air defense systems effectively. The Syrian regime is protected by several Russian-origin air defense systems, including the S-300, S-400 High Altitude Air Defense Systems (HIMADS), Buk-M1 medium-range surface-to-air missile (SAM) systems, and Pantsir SHORADS. The Israeli Air Force has regularly defeated these systems through the combined use of electronic warfare, anti-radiation missiles, and stand-off precision guided munitions. Many of the tactics, techniques, and procedures used to defeat SHORADS in Libya were tested during the Turkish military's brief 2020 winter campaign in Idlib Province during which Turkey destroyed Pantsir SHORAD and Buk-M1 medium-range SAM systems operated by the Assad Regime. Some of the destroyed Syrian and Libyan Pantsir systems appeared to be operational in the field, while others were being moved on flatbed trailers or hiding under sheds at the time they were knocked out. This shows how good intelligence aiding offensive attackers can easily neutralize defensive systems.

Not all of these systems were defeated due to inherent technical shortcomings. The tactical and strategic situation in which these air defense systems are employed also affects their performance. For example, as part of a United States government foreign assistance-funded project, RAND has examined open source reporting that highlights how Syrian personnel operating newly-acquired advanced Russian air defense systems lack the training time that is needed to effectively operate these complex systems. The repeated success of forces using drones and low-flying missiles to destroy or suppress multiple air defense systems on the battlefield is a cautionary note about the effectiveness of these systems against modern air threats. In both Libya and Syria, lower cost offensive drones and low-flying missiles have bedeviled more expensive, complex, and difficult to operate air defense systems.

Even well-equipped countries like Saudi Arabia know from the drone and missile strikes on its oil facilities during the late summer of 2019 by Houthi rebels or Iranian operatives that effective air defense against armed drones or low-flying missiles is very difficult. Similarly, as Iran knows from its own tragic misfires of its Russian-supplied Tor air defense system that shot down a Ukrainian passenger airliner, operating sophisticated precision guided missile systems requires extensive training, and even then tragic errors can occur.

Russian defense company and government officials have marketed their advanced HIMADS and SHORADS as highly effective against aerial threats. However, as the recent fighting in Libya and Syria has demonstrated, the acquisition and operation of a modern integrated air defense system is a challenging military enterprise. Even technically, effective weapons can and have been defeated. Unfortunately for the air defenders around the world, an offensive attacker has a wide range of electronic and kinetic weapon options to degrade if not defeat that air defense. National decisionmakers would be wise to carefully weigh offense and defense trade-offs to meet their security needs before spending national treasure on expensive and complicated systems that are hard to operate and do not always work as advertised in the field.

This commentary originally appeared on RealClearDefense on July 2, 2020. Commentary gives RAND researchers a platform to convey insights based on their professional expertise and often on their peer-reviewed research and analysis.