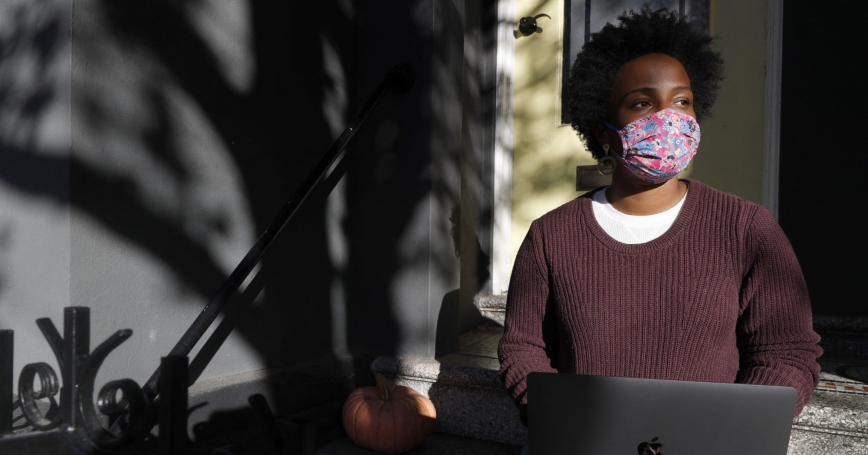 Since the onset of the COVID-19 pandemic, nearly half of the American workforce (PDF) has shifted to working from home. The initial assumption among employers and employees alike was that physical offices would return as a normal part of the working environment once public health guidance permitted.

Over a year into the pandemic and on the cusp of a fourth wave, however, a return to the office anytime soon feels elusive. Today some workers are reluctant to return to the office and plan to continue to work remotely even after physical-distancing measures are lifted. If this comes to pass, it could deepen patterns of inequality in America's economic and societal recovery, since the ability to work from home—and in turn reduce the risks of exposure to COVID-19—differs substantially along lines of age, gender, class, race, and urban-rural disparities in American society. Policymakers, employers, and the public should consider taking steps now to ensure that the future of remote work is beneficial for all.

Remote work has introduced massive shifts within the American workforce that are reinforcing preexisting inequalities. Consider the following examples. The burden of balancing work responsibilities, childcare, virtual schooling, and housework is falling disproportionately on working mothers, leading some observers to argue that the United States is in the midst of a “she-cession” in which unprecedented rates of women are dropping out of the labor force.

Though these are perennial workplace problems, older workers and minority workers report concerns over unconscious bias, a lack of representation, and a sense that the remote workplace is more permissive for toxic or discriminatory behavior (PDF) that would be easier to monitor if work were being done on-site in the office. A quarter of rural working adults lack access to high-speed internet, compromising efficiency in a remote work environment. Workers more broadly are not receiving as much social support from colleagues, as holding difficult conversations, building trust, and spurring organic creativity are not as easy to do in a geographically distributed work-from-home setting.

Access to broadband is an essential step towards rectifying the digital divide and would allow rural populations to access more high-paying industrial jobs that can be performed virtually.

While avoiding the rush-hour commute is a big upside of working from home for many employees, and one that has attracted substantial attention in the media, policymakers need to recognize the demand not only for programs that maximize the upsides of telecommuting but also those that help minimize downsides of, as well as disparities in access to, opportunities to work from home. The Biden administration's American Jobs Plan aims to address infrastructural inequities in access to affordable broadband internet. Access to broadband is an essential step towards rectifying the digital divide in the United States and would allow rural populations to access more high-paying industrial jobs that can be performed virtually.

Previously, the 2020 Families First Coronavirus Response Act expanded family leave for parents dealing with school closures and caregiving responsibilities for sick relatives, but did little to protect part-time workers. The 2021 American Rescue Plan provided another round of stimulus checks and expanded additional support for schools and state and local vaccination rollouts. But childcare for working parents remains a significant challenge. Working mothers in particular have been traditionally underrepresented in the workplace even though they are critical for America's economic bottom line.

The pandemic has illustrated workforce needs in the development of new skills and adapting to new technologies. In the absence of action on such policy steps, it is possible that employers would move to outsource some jobs to telework contractors overseas instead of cultivating these skills among the existing workforce. Federal and state governments also could augment the quality of and access to technical and vocational training to accompany the massive shifts towards automation and virtual analytics that were well underway prior to the onset of the pandemic.

The country will likely never go back to pre–COVID-19 business as usual. Continuous disruptions to the status quo might become the norm. In defining the future of work in the United States, the American worker could be viewed as an asset; and the economy could develop safe, rewarding, well-paying jobs that afford American workers a sustainable middle-class existence.

Building a safe, healthy workforce where success, productivity, and financial security are available to all segments of American society could provide resilience against inevitable future shockwaves. Since working from home is a key part of such a resilience, policymakers could focus on supporting the advantages, remediating the downsides, and expanding access to this form of work.

Kathryn (Casey) Bouskill is a social scientist at the nonprofit, nonpartisan RAND Corporation and associate director of the RAND Center for Global Risk and Security. She is also a professor at the Pardee RAND Graduate School. Scott W. Harold is a senior political scientist at RAND.

A version of this commentary originally appeared on Detroit News on May 11, 2021.