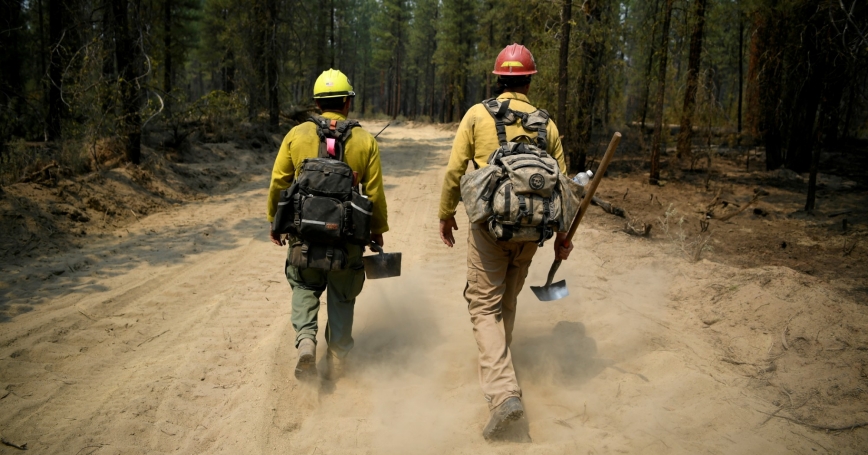 Firefighters mop up hotspots in the northwestern section of the Bootleg Fire as it expands to over 210,000 acres, Klamath Falls, Oregon, July 14, 2021

Scorching temperatures. Drought across 90 percent of the West. To these dangerous conditions as the fire season is underway, add a looming crisis of burnout among wildland firefighters.

Increasingly intense fire seasons are taking a physical and mental toll. Last year was among the worst on record: Flames blackened an area larger than the entire state of Maryland in 2020. Fire seasons start earlier and last longer.

President Joe Biden recently said the federal government would give firefighters bonuses and retention incentives to make sure they earn at least $15 an hour. The U.S. Forest Service and Interior Department will also hire more temporary and full-time workers. These are important steps. But without more direct attention paid to their mental health, burnout could still decimate the ranks of firefighters who protect lives and property across the West.

Job burnout coincides with mental health issues like anxiety, depression, and PTSD, as well as higher rates of substance abuse and suicide. A 2018 study of wildland firefighters found that 55 percent of them reported clinically significant suicidal symptoms. The job also puts a strain on their home lives. As a group advocating for better working conditions put it: We “miss our kids birthdays, friends' barbecues, aren't around to help put the kids to bed or make dinner, and this takes a toll on us. This causes us to lose social connections and friendships, to feel distant from our loved ones, and increases our divorce rates because we aren't present to support our partners.”

Long hours are baked into the job. Wildland firefighters are expected to work 12, 16, even 24 hours on fires—and often take only two days off for every 14 days of straight work. And they do this for very little pay. Without the recently announced bonus pay, the starting salary for federal wildland firefighters is $26,150 annually, or $13.41 an hour (PDF) (less than California's minimum wage). One 14-year veteran firefighter summed his situation up this way: “When I go on an assignment, the babysitter makes more per hour than I do on a fire.”

Any worker who is burned out performs lower-quality work, has low morale, and has higher rates of absenteeism and job turnover.

Any worker who is burned out performs lower-quality work, has low morale, and has higher rates of absenteeism and job turnover. This could leave fire services stretched thin. Already the United States is experiencing staff shortages among other emergency response agencies. In the U.S. Forest Service, some departments are currently understaffed by 30 percent. The largely temporary workforce of FEMA emergency responders are also tapped out after working on COVID-19 vaccinations and handling a surge in migrants at the southern border.

Some solutions for reducing burnout are relatively simple. One is improved mental and physical health supports, such as the kind of therapy and chaplain services some intensive care unit staff were provided during the surge of COVID-19 hospitalizations. Firefighters are also advocating for on-staff psychologists and paid leave for mental health care.

Decreasing the workload by hiring more staff, both in support roles and on the fire line, is another solution—one that will allow organizations like the Forest Service and FEMA to expand their workforce to match increases in need. Better pay and improved benefits could be expected to improve job satisfaction as well. Together these strategies can minimize burnout among these crucial workers which in turn will support a more resilient corps of wildland firefighters.

Grace Hindmarch is a research assistant at the nonprofit, nonpartisan RAND Corporation with a background in public health and anthropology. Aaron Clark-Ginsberg is a social scientist at RAND whose research focuses on disaster risk management and community resilience. He grew up and currently lives in Portland, and previously worked as a wildland firefighter. Jay Balagna is an assistant policy researcher at RAND who focuses on disaster risk management and the influence of climate change on disasters. He previously worked as a wildland firefighter and EMT.