What Does Africa Need Most Now: Russian Arms Sales or Good Vaccines? 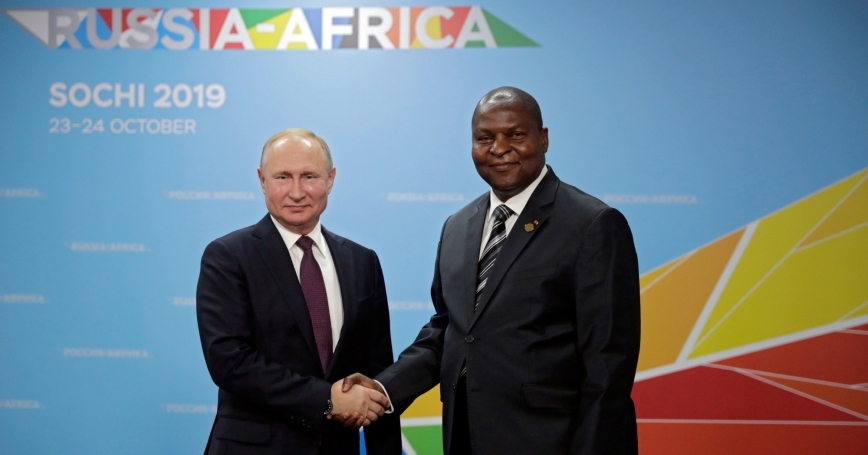 Photo by Mikhail Metzel/Kremlin via Reuters

Africa has not traditionally been a high-value market for arms exports, but Russia has been very active on the continent. Moscow is using arms sales there to influence political and military leaders.

Russia is the largest exporter of weapons to Sub-Saharan Africa (PDF). Its arms exports to Africa have increased by 23 percent over the last four years when compared to the previous four-year period, 2011–2015. Given Africa's considerable economic potential, why is Russia's main export to the region advanced conventional weapons—at a time when other needs, including those posed by the COVID-19 pandemic, are so great?

Alexander Krasovitsy, CEO of the Russian defense manufacturer Military Industrial Company, said that “conquering the African market is caused by a significant decrease in business activity last year due to the coronavirus pandemic, so we are catching up.” As one analyst observed recently, “Moscow has broken into the African arms trade in a big way, and there is no indication that it will relinquish its dominant market position any time soon.”

Recently Moscow sought to block the U.N. Secretary General's appointments of new officials to panels monitoring sanctions enforcement in the Democratic Republic of Congo, Central African Republic, Sudan, South Sudan, and Libya. In return, Russia calls upon these governments to support its initiatives in the U.N. General Assembly, helping to further its image as a major power in world affairs. Tragically, another trait shared by the countries mentioned above is their rate of vaccination, which ranges from less than 8 percent of the population to less than 1 percent of the population. None of them have met the WHO's objective of getting at least 10 percent of their population vaccinated. Despite all the fanfare surrounding Russia's Sputnik V vaccine, it was overpromised and underdelivered in Africa.

Russian private military companies make violence worse in the countries they are paid to help.

Another way Russia exerts its influence in the region, particularly with unstable countries, is through the state's facilitation of relationships with Russian paramilitary groups like the Wagner Group. These groups are sometimes referred to as private military contractors (PMCs), but they are more aligned with the state than their equivalents elsewhere. Such groups step in to provide military training or leadership protection in exchange for fees or mineral concessions. They also have been accused of gross human rights violations and of intensifying conflict where they operate. A U.N. statement expressing concern about private military contractors operating in the Central African Republic illustrates the lawless and disconcerting way these entities operate. U.N. peacekeepers in the same area received reports of PMCs and Central African Republic armed forces engaging in “mass summary executions, arbitrary detentions, torture during interrogations, forced disappearances, forced displacement of civilian population, indiscriminate targeting of civilian facilities, violations of the right to health, and increasing attacks on humanitarian actors.” Russian private military companies make violence worse in the countries they are paid to help.

In the case of private military companies, Putin prefers not to acknowledge their connections to people close to him or to the Russian government. By turning dangerous duties over to Russian PMCs that the U.N. identifies as mercenary forces, he can disown whatever unsavory things they do in search of profit. The Putin regime gets the benefit of exerting its influence over these regimes and creates conditions where people in his inner circle can profit from them.

Given the health and economic challenges many African countries face, Russia's exports of arms and mercenaries probably are not good for the security and well-being of the populations in these countries.

Lower access to vaccines and low rates of vaccination combine to hold back many African countries' post-pandemic economic recovery.

According to a recent IMF report, Sub-Saharan Africa is “the world's slowest growing region” and “the COVID-19 crisis is expected to undo years of economic and social progress and leave lasting scars on the region's economies.” Lower access to vaccines and low rates of vaccination combine to hold back many African countries' post-pandemic economic recovery.

Despite these dour circumstances, there is tremendous potential for progress on the continent. More than 90,000 new users are connecting to the internet for the first time every day. The African Continental Free Trade Area launched in 2020 makes the continent the largest free trade zone on the globe. Even just trade within the continent offers tremendous potential to reduce Africa's vulnerability to global disruptions and could boost regional competition, improve productivity, attract foreign investment, and promote food security. The World Bank (PDF) estimated that the agreement will increase regional income by 7 percent, improve wage growth for women, and lift 30 million people out of poverty by 2035.

Spending limited national resources on weapons and Russian private military companies does not address the core security problems the people of Africa face. The pandemic and economic decline combine to threaten the security of individuals and communities throughout the continent. African leaders might think twice about the aggressive Russian arms pitches and the engagement of mercenaries. Instead, they might be better off prioritizing measures to stem the pandemic and encourage economic growth.

John V. Parachini is a senior international defense researcher and Ryan Bauer is a defense analyst at the nonprofit, nonpartisan RAND Corporation.

This commentary originally appeared on RealClearWorld on November 16, 2021. Commentary gives RAND researchers a platform to convey insights based on their professional expertise and often on their peer-reviewed research and analysis.