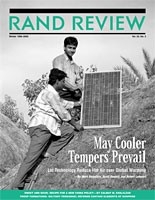 In the absence of incontrovertible scientific evidence to forecast the consequences of global warming — or the costs of preventing it — the debate over emissions targets has often been driven by personal and political interests. Mark Bernstein, Scott Hassell, and Robert Lempert argue that developing and industrialized countries alike can avoid both environmental and economic disaster by harnessing alternative fuel technologies. The authors suggest that such a strategy would produce reasonable outcomes no matter whose view of the future proves correct. Zalmay M. Khalilzad explores whether the United States should abandon or modify its strategy of engagement with China or switch entirely to a strategy of containment, concluding that a new, blended strategy, which he terms “congagement,” should be adopted. RAND studies on military personnel policies explore alternative strategies for recruitment, retention, and retirement to help the U.S. military attract and keep enough good people. Included are news briefs on the following: An experimental drug may be linked to Gulf War syndrome; judges hold the key to eliminating abuses and improving outcomes in class action lawsuits; government email could cut costs and improve service; increasing education levels among blacks and Latinos could pay for itself; a new study is assessing the quality of public vocational education in the United States.